Outside during the US Capitol during the January 6, 2021 attack on the building. Photo by Tyler Merbler

Outside during the US Capitol during the January 6, 2021 attack on the building. Photo by Tyler Merbler

Documents show that the Republican hearing witness opposing the nomination of Ketanji Brown Jackson for the Supreme Court headed a dark money group that promoted the January 6th insurrection.

A witness selected by Republicans to testify at Judge Ketanji Brown Jackson’s confirmation hearing sought to delay certification of the 2020 election and chaired a dark money group that promoted the January 6 rallies that resulted in the Capitol riot. That group received funding from Judicial Crisis Network, which has spent tens of millions on Supreme Court nomination battles.

n December 2020, Marshall joined a coalition of Republican attorneys general who filed an amicus brief urging the U.S. Supreme Court to delay certification of the presidential electors in four battleground states where President Donald Trump lost. As the New York Times described it, the brief “represented the latest attempt by Trump loyalists to use the power of public office to come to his aid as he continues to deny the reality of his loss with baseless claims of voter fraud.” The far-fetched lawsuit failed.

Just after the brief was filed, Trump was set to have lunch with the Republican AGs who joined it, and on December 11, 2020, Marshall tweeted a photo of himself at the White House standing behind President Donald Trump.

Thank you, President @realDonaldTrump, for your strong leadership and for always putting #AmericaFirst! Alabama stands with our great Commander in Chief! #MAGA 🇺🇸 pic.twitter.com/nFs5mDoMUw

Update: During the March 24 hearing, Sen. Whitehouse asked Marshall whether Joe Biden is the “duly-elected” and “lawfully-serving” President of the United States. Marshall refused to answer the question.

.@SenWhitehouse: "Is Joseph R. Biden of Delaware the duly elected and lawfully serving president of the United States of America?"

.@agstevemarshall: "He is the president of this country."

Whitehouse: "Is he the duly elected & lawfully serving president of the United States?" pic.twitter.com/BBUDTC9zta

Marshall served as Chairman of the Rule of Law Defense Fund (RLDF), the dark-money policy arm of the Republican Attorneys General Association, at the time the group sent robocalls on the eve of the U.S. Capitol riot. The calls urged supporters to march to the Capitol on January 6.

Robocall Transcript: “I’m calling from the Rule of Law Defense Fund with an important message. The ‘March to Save America’ is tomorrow in Washington D.C. at the Ellipse in President’s Park between E Street and Constitution Avenue on the south side of the White House, with doors opening at 7:00 a.m. At 1:00 p.m., we will march to the Capitol building and call on congress to stop the steal. We are hoping patriots like you will join us to continue to fight to protect the integrity of our elections. For more information, visit MarchtoSaveAmerica.com. This call is paid for and authorized by the Rule of Law Defense Fund, 202-796-5838.”

Additionally, MarchtoSaveAmerica.com, the website that coordinated the logistics of the January 6 rally, listed RLDF as one of several “coalition partners,” according to an archived version of the website.

RLDF made the robocalls at the behest of donor Julie Fancelli, the heir to the Publix grocery store chain, who gave $150,000 to the group to promote the “stop the steal” rally. The RLDF donation was reportedly arranged by Trump fundraiser Caroline Wren.

In November 2020, Marshall said he was “honored to lead” RLDF. “As attorneys general, our mandate is to hold fast to the principles that this country was founded on and to defend the Constitution and the preeminence of law and order,” Marshall stated in a RAGA press release announcing the 2021 RLDF and RAGA leadership. “And that is what conservative attorneys general have done and will continue to do: advance American greatness.”

In response to the widely reported robocalls, Marshall claimed he directed an internal review on the matter: “I was unaware of unauthorized decisions made by RLDF staff with regard to this week’s rally,” Marshall said in a statement, according to reporting. “Despite currently transitioning into my role as the newly elected chairman of RLDF, it is unacceptable that I was neither consulted about nor informed of those decisions. I have directed an internal review of this matter.”

As of April 2021, it was unclear whether the review had concluded, according to Eddie Burkhalter of the Alabama Political Reporter. RAGA and AG Marshall’s office did not respond to a request for comment by Documented.

According to an April 2021 bi-annual report filed by RLDF, Marshall continued to serve on RLDF’s board after the robocall. 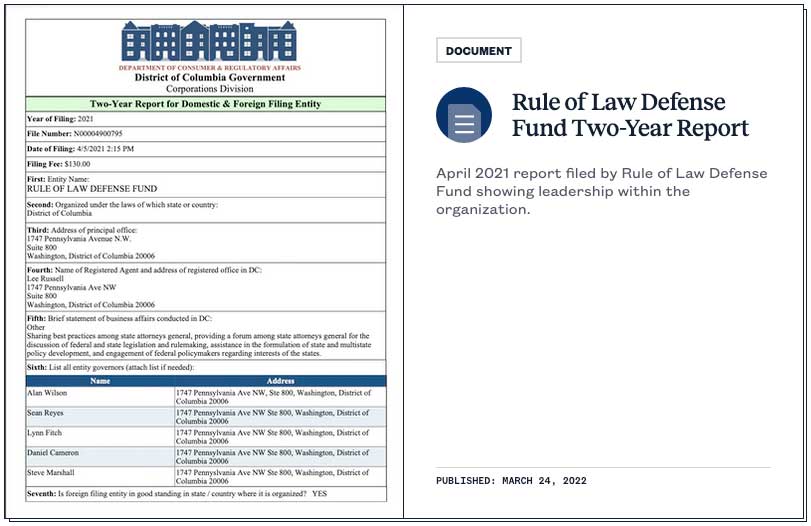 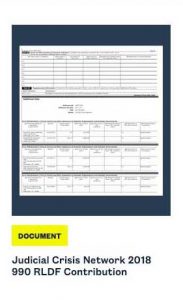 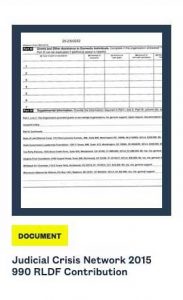 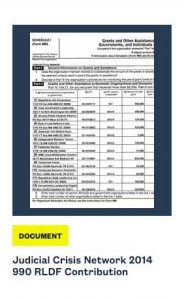 The dark-money group Judicial Crisis Network (JCN), which spent millions backing Trump judicial nominees and most recently involved in the latest opposition efforts to Jackson’s nomination, contributed at least $1.4m to RLDF since 2014.

The cash flow has gone both ways. In 2020, according to expenditure reports, RAGA paid $45,000 in consulting fees to Creative Response Concepts, the public relations firm that was re-branded to CRC Advisors with Leonard Leo at the helm.