One western Florida community celebrated the success of a program to restore what Hurricane Michael took from it, others braced for Hurricane Ian, a storm projected to be among the most damaging to ever strike the state.

From all appearances the 2022 Atlantic hurricane season was on track to be fairly quiet, a welcome break during a series of 1,000-year rain events. “Peak activity is usually in the first 10 or 12 days of September,” says Victor Murphy, climate service program manager for the Southern Region of the National Weather Service (NWS).

The calm broke when Tropical Storm Fiona developed into a hurricane on Sept. 18, making landfall on Puerto Rico and hitting the Dominican Republic on the next day. It strengthened into a major Category 4 storm and left a path of destruction that reached as far north as Eastern Canada.

By Sept. 26, Ian had developed into the second major storm of the season. It passed over Cuba, on track to strike Florida’s west coast. Though the most recent forecasts have Ian hitting the state below Tampa and not creating a nightmare scenario by entering Tampa Bay, it is expected to be one of the most costly in U.S. history.

An extreme wind warning is in effect for Englewood FL, Rotonda FL, Grove City FL until 2:00 PM EDT for extremely dangerous hurricane winds. Treat these imminent extreme winds as if a tornado was approaching and move immediately to an interior room or shelter NOW!. pic.twitter.com/VztAfMbO8m

The most troublesome thing about Ian, Murphy says, is that it “checks all the boxes” that signal potential for the most destructive possible impacts. Storm surge, a deadly risk, may be 12 feet or more in some areas, says Joel Cline, tropical program coordinator for NWS.

Florida has already had 10-15 inches of rain this month, Murphy notes, twice the norm. This sets the stage for worse than usual flood damage when 10-15 inches more fall over a two-day period. (If the storm progresses as predicted and the center of the storm is below Tampa, wind shear could push rain toward the city, Kline says, worsening its impacts.)

In addition, Ian is now a Category 4 storm and approaching Category 5. This means sustained wind speeds could be more than 150 mph, speeds associated with “catastrophic” damage.

Enki Research estimates that the costs resulting from the storm will be in the $40 billion range. This is lower than its estimate of more than $70 billion from a direct hit on Tampa, but still enough to make Ian one of America’s 10 most-costly hurricane disasters.

Hurricanes with the highest cost to the U.S. (top 10)

(Cost values based on the 2022 Consumer Price Index adjusted cost.)

Nine of the 10 have occurred since 2005. Climate change is not associated with more frequent hurricanes, says Murphy, but according to the National Oceanic and Atmospheric Administration more of the storms that form over warmer seas will be Category 4 or 5.

Nonetheless, development continues in coastal areas of Florida and other Gulf states with concentrations of high-end properties close to the shore. The financial impact of 21st-century hurricanes already exceeds $1 trillion; it’s not possible to calculate the effects of these disasters on the spirit of those caught in them.

Where’s the line between resilience and unacceptable risk? It’s a question that can be as difficult for planners to answer as to predict the path of a hurricane. Early concerns that Ian would strike Tampa directly were allayed when the storm changed course, but the area is still at risk of flooding. (NOAA/NWS/NCEP/WPC)

Hurricane Katrina was by far the most costly hurricane in U.S. history, but in 2022, New Orleans is better prepared to withstand another hurricane than most coastal cities, says architect and planner Steven Bingler. Bingler’s firm received a grant from the Rockefeller Foundation to develop a recovery plan for the city after failed attempts by the city’s mayor and City Council.

“New Orleans is safer because of $14 billion worth of new levees and a whole new drainage system — if you look at even the 10-foot sea rise levels New Orleans is still essentially high and dry,” Bingler says.

That doesn’t mean the same can be said for the rest of the Louisiana coast, however. One solution Bingler and others advise for south Louisiana is “managed retreat.” The process is already underway, with Louisianans moving inland to Alabama towns like St. Francisville and Andalusia.

Other factors are putting pressure on those living in communities with high flood risk. Bingler brought in dozens of consultants to develop his recovery plan, and one told him that over time it would be actuarial tables, not zoning, that would keep people from living in harm’s way.

This evolution has progressed rapidly, if not sustainably. “In Plaquemines Parish right now it costs $30,000 to insure your home, every year,” says Bingler. “How many people can afford that? Nobody, so nobody’s insured, everybody’s living on the edge.”

An insurance crisis was unfolding in Florida before Ian emerged in the tropics. The state has insurance rates three times the national average; in response, the Legislature created a government nonprofit to provide low-cost coverage to citizens who couldn’t afford it elsewhere. Depending on the scale of claims from Ian, both private insurers and the state are likely to face overwhelming obligations, with long-term consequences for housing and development.

Bingler is far from a climate skeptic, but as a planner he’s more focused on the fact that there’s nowhere to run from the effects of warming, whether fire, flood, drought or hurricanes. The country might need to spend at a level comparable to its military budget just to put things back together after the climate disasters that lie ahead, he says. “Nobody’s ever done the math, and somebody needs to.”

Managed retreat may be a logically sound concept, but most find it very hard to leave the homes and places they love. The larger the community, the more impractical retreat becomes. As Bingler sees it, it’s time to get real about what lies ahead and plan accordingly.

One coastal city in Florida knows full well what an extreme weather event can take from residents and is succeeding in reclaiming a much-loved resource. 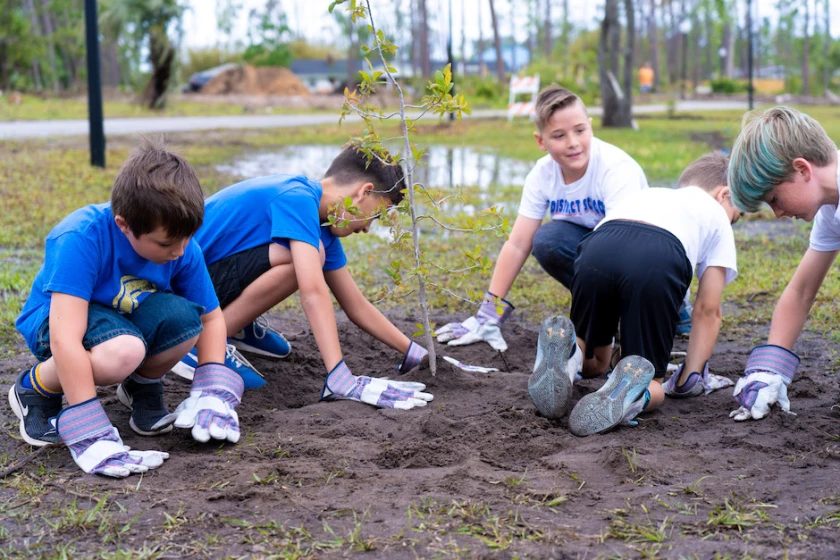 Panama City Students plant trees at Harvey Dee Mathis Park, which lost the majority of its dense tree canopy. To date, donations and grants have made it possible to plant nearly 200 trees in the park. (Panama City)

Hurricane Michael struck Panama City in October 2018, a Category 5 hurricane. Homes and businesses were not the only casualties from the fiercest winds to hit the town of 36,000 in a century. They also ripped out 80 percent of its tree canopy, an estimated 1 million trees, says Mayor Greg Brudnicki.

The loss of so many trees created an environmental emergency. An average tree can take up 50 to 100 gallons of water from the ground each day, Brudnicki says. With hundreds of thousands pulled from the ground, heavy rains brought flooding in areas that had never flooded before. Heat islands intensified; the benefits of windbreaks disappeared.

“We are experiencing real climate change, not something that we can’t really put our fingers on,” says Brudnicki. “There’s debate between people who believe in climate change and those who don’t, but we have it here because of the storm and it’s really affecting our citizens.”

In addition to its many other efforts to rebuild, the city launched ReTreePC, a campaign to plant 100,000 trees by 2025. This effort has been supported by workshops, tree giveaways and a National Arbor Day event. Students have planted trees to replace those lost in city parks. Beyond restoring the tree canopy, it aims to strengthen ties between neighbors and to foster volunteerism.

Arborist Charlie Marcus has assisted the city with its tree inventory and urban forest management plan. He came to consulting after decades with the Florida Forest Service and long experience with replanting and pruning projects in the aftermath of hurricane damage.

“Within five to 10 years of planting, there is a noticeable difference,” Marcus says. “The trees are contributing to the aesthetics of the area, providing some wildlife habitat, returning the community to a more livable place. After 15 to 20 years, they’ll provide a noticeable amount of shade as well as other amenities that trees provide to a community.”

The mayor has found partners from the business and corporate worlds to support ReTreePC and has received funding from USDA and the Florida Forest Service. He still mourns the loss of a 60-year-old pecan tree in his backyard and the beauty, shade and fruit that it provided.

“You don’t miss it until you lose it,” he says, “I think about it every time I go out on my back porch.” Storm surges as high as 18 feet are possible in coastal areas dense with high-end development. (NWS)

Plan A has been to mitigate the effects of climate. While that’s important, Bingler argues that it’s vital to acknowledge the severity of the effects we are already experiencing. Plan B, he says, is managing the conditions that we are given before it’s too late to develop the capability to prepare for, or respond to, climate impacts.

Community engagement is critical to the success of planning both pre-crisis resilience and post-crisis recovery. Bingler and the urban planning firms he hired to help with a Katrina recovery plan held community meetings that involved 9,000 people.

“That’s the only way it works when you are in a state of crisis — the solution cannot come from on high,” he says. “It has to come from working together.”

It’s overwhelming enough to confront what Ian might bring to Florida, much less to confront what a future of more fires, more floods and more storms might mean for communities. But, says Bingler, hiding from these realities only increases the odds for bad outcomes.

“Planning is always a good idea, and it’s even better when you do it ahead of time.”

Republished with permission from Governing Magazine, by Carl Smith