With Joe Manchin responsible for blocking key climate provisions in Build Back Better as well as the final bill, people will find it enlightening to see just how deeply embedded he is with the coal industry.

This article is republished with permission from Documented, by Nick Surgey. [Originally posted last year before Joe Manchin killed off any hope of passing the Build Back Better bill, Factkeepers is republishing it now to refresh people’s awareness of the depth of Machin’s corruption.]

Anyone even vaguely following the will they/won’t they drama of the Build Back Better negotiations, will know that Senator Joe Manchin is widely viewed as responsible for blocking significant programs to tackle climate change. Specifically, he’s credited with killing the inclusion of the widely-touted clean energy provisions.

There has been significant reporting in recent weeks about Manchin’s financial ties to the coal industry. See Joe Manchin’s Dirty Energy by Daniel Boguslaw writing for The Intercept.

The quick version is that Manchin is the founder and part-owner of a West Virginia coal brokerage company called Enersystems. He received a salary of $174,000 from the Senate in 2020, but last year he got so much more than that – $491,949 – from Enersystems, according to his financial disclosures.

Manchin has said that his ownership of Enersystems is held in a blind trust. Despite that, his coal industry profits are pretty obvious. Sludge tallied up those disclosures, and Manchin has earned more than $5.2m from Enersystems since he joined the Senate in 2010.

Manchin also has significant investments in another company, Farmington Resources, which owns some coal reserves and provides support services to the mining industry, according to The Intercept.

On an investor call last week, Joe Craft, the CEO of Alliance Resource Partners spoke about Manchin’s help for the coal industry during the Build Back Better negotiations.

Documented has now learned that Manchin was listed as a keynote speaker at a September 2021 secret invite-only meeting with the CEOs of numerous coal companies, including Joe Craft of Alliance Resource Partners.

We reached out for comment from Manchin’s office, asking them to confirm his appearance and disclose what was discussed at the event. As of publication we have not received a response despite multiple requests for comment.

The 2021 Coal and Investment Leadership Forum

Documented has obtained materials from an annual elite-level coal industry event, called the Coal and Investment Leadership Forum, which took place from September 19-21, 2021. The annual event is billed as “a private, invitation-only conference focusing on the challenges and opportunities facing coal and energy around the globe today.” 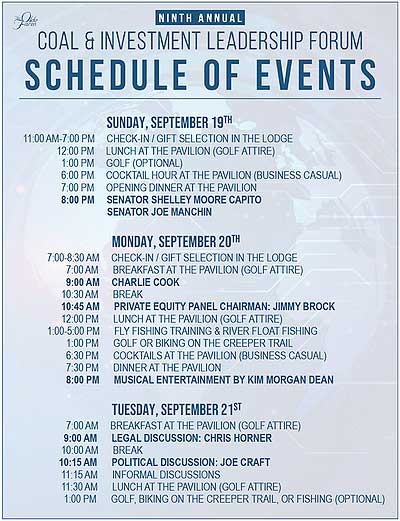 This year Manchin, along with fellow West Virginia Senator Shelley Moore Capito (R), were described in an invitation obtained by Documented as being the event “headline” speakers.

Manchin is about as close to a rock star as you might find right now to coal CEOs, facing the inevitable end to their industry as we transition (oh too slowly) to clean energy.

Here is a video made by the Olde Farm for attendees previewing the event, obtained by Documented:

You can see the read the invitation and participant list here (click to see the full documents): 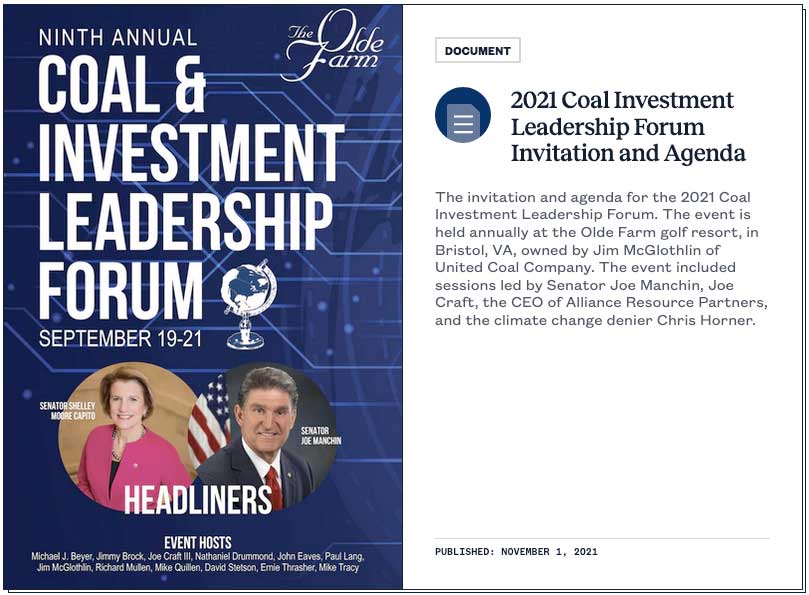 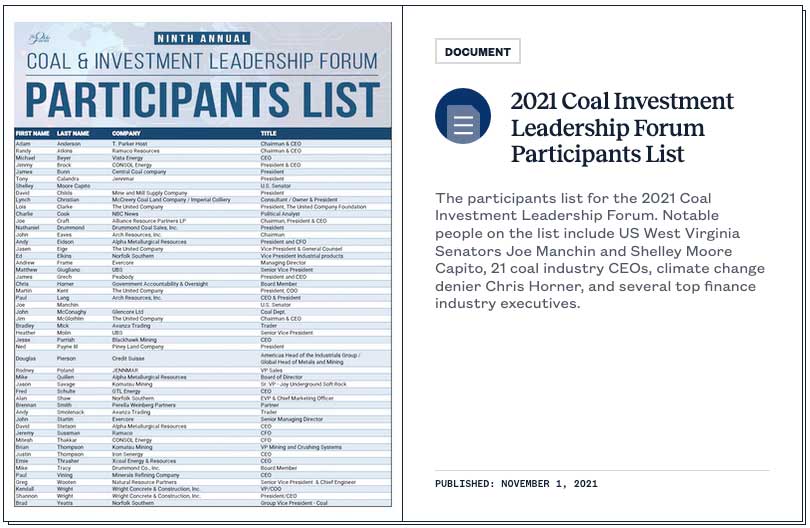 Also scheduled to speak was the notorious climate change denier Chris Horner. In 2016, bankruptcy filings for Alpha Natural Resources, one of the coal companies hosting this year’s forum, revealed Horner was secretly being paid by the company. Horner is best known for his repetitive targeting of climate scientists with lawsuits, a practice that has been described as “harassment.”

As a 2015 Grist article described it: “One of Horner’s preferred tactics is to inundate climate researchers with records requests so they get too bogged down with his bullshit to do actual work.” Horner has written a book called “Red Hot Lies: How Global Warming Alarmists Use Threats, Fraud, and Deception to Keep You Misinformed.”

Horner is listed on the agenda as leading a “legal discussion,” whatever that means.

According to the invitation, attendees had to cough up $7,000 just to get in, not including the cost of staying at the resort. An investment banker, Douglas Pierson of Credit Suisse, was on the list, along with Matthew Giugliano, Senior Vice President at UBS Private Wealth Management.

Andrew Frame, the Managing Director of Evercore, an investment banking advisory firm was also named. Evercore, which had $2.2 billion in revenue in 2020, advises on mergers and acquisitions like the $14 billion purchase of Whole Foods Market by Amazon in 2017. It currently works for Murray Energy, advising the coal company as it navigates chapter 11 bankruptcy.

Manchin Attacks on Climate in the Build Back Better Plan

According to Coral Davenport of the New York Times, Manchin “effectively succeeded in stripping the bill of its most powerful climate change provision, a program that would have rapidly shut down coal and gas-fired power plants and replaced them with wind and solar power.”

The text of the Build Back Better plan, revealed late last week by the White House, included $555 billion in tax credits and other grants aimed at cutting carbon emissions. According to the Washington Post, the tax credits will make it “easier to buy electric vehicles, install solar panels, retrofit buildings and manufacture wind turbines and other clean-energy equipment in the United States.

But entirely missing from the text was the Clean Electricity Performance Program (CEPP.). The opposition from Senator Manchin is credited with having killed CEPP.

So what is CEPP you ask?

The Biden administration set an ambitious goal of decarbonizing 100 percent of the country’s electricity generation by the year 2035. This target is part of a longer term goal of becoming a net-zero economy by 2050. The Clean Electricity Performance Program, which was a part of the larger proposed $3.5 Trillion package, is (or I guess now “was”) a key element of the Administration’s plan for how to reach these goals. A version of CEPP passed out of the House Energy and Commerce Committee in mid-September.

According to the Natural Resources Defense Council (NRDC), CEPP would shift utilities away from the burning of coal and gas: “by making a $150 billion public investment over the coming decade in power companies that meet annual targets for expanding clean electricity. To ensure proper incentives and a level playing field, the CEPP also collects a payment from power companies that fail to meet those targets.”

This might all sound a little technical, and the acronyms probably don’t help. But the scientific consensus is that we urgently need to switch from burning fossil fuels to clean alternatives. CEPP would help turbo-charge that transition by pushing utilities to switch fast.

The clean energy target is not just good policy, it’s also politically popular. According to Data for Progress, 62 percent of voters “support the government moving the country to a 100 percent clean energy electricity grid by 2035.” That’s 62 percent of all voters combined. For Democrats that number is a whopping 85 percent. 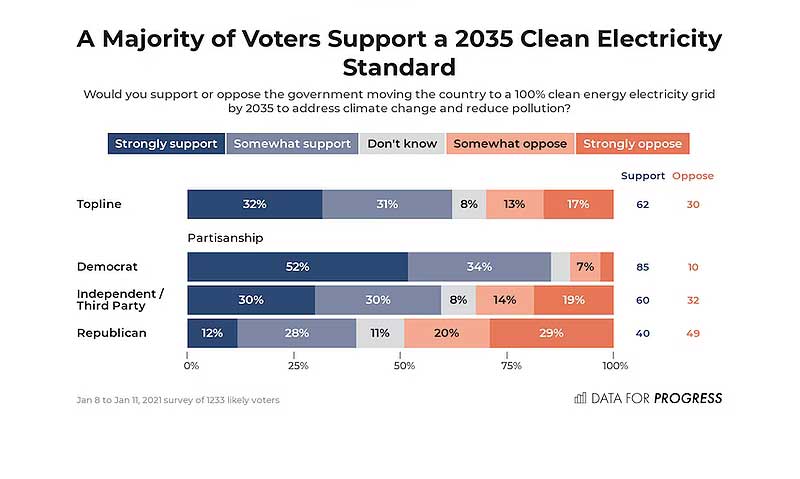 Data for Progress polling of support for the 2035 Clean Energy StandardUnfortunately, it might be both good policy and good politics, but tackling climate change is definitely unpopular with coal CEOs, climate deniers, and anyone else making bucket loads of cash from the coal industry. And that, according to his own financial disclosures, includes Senator Joe Manchin.