Origin Park is a unique urban park set in over 600 acres on the north shore of the Ohio River, located on the Indiana side.

Susan Rademacher looks like she doesn’t belong here. Outfitted in a straw hat, linen shirt and tortoise shell glasses, the one-time garden club president pulls up in front of an auto salvage yard on a narrow and neglected country road in southern Indiana. A large sign announces this as the location of Marshall’s New & Used Auto Parts: “We Buy Junk Cars.” A number of smaller signs point the way to nearby Wheeler’s Auto Salvage, Kenny’s Auto Parts and a trucking company. Marshall’s collection of wrecked and rusted cars and trucks is partially hidden behind a long grey corrugated metal fence.

But Susan is not here in search of used car parts. She is the executive director of the River Heritage Conservancy, a nonprofit organization dedicated to the creation and maintenance of new parklands along the Ohio River. Plans call for the junkyards to be cleared and incorporated into the Midwest’s first climate-adaptive park, a 600-acre public-private partnership known as Origin park. “This is an industrialized, exploited landscape,” Susan says. “We have to step in, and kickstart natural processes so that it becomes a healthy landscape. One that is worthy of developing for human use.” Salvage yards and the remnants of past industry will need to be removed before park construction can begin. (Photographs by David Kidd/Governing)

The new park is being developed at the Falls of the Ohio, a 2-mile stretch of onetime waterfalls and rapids, since mitigated by a series of dams. Louisville, Ky., and the towns of New Albany, Clarksville and Jeffersonville, Ind., were originally established here as portage locations before a canal was constructed in 1830.

Parts of the shoreline have already been developed for public use. Known as the Ohio River Greenway, nearly 7 miles of continuous multi-use paths along the river connect the three towns. The project was an intercity collaboration, with each municipality responsible for its own section. A new, elevated addition to the Greenway will be a feature of Origin Park.

When complete, the new park will offer miles of hiking and biking trails across a natural landscape of forests, streams and meadows, all within a half-hour drive for 1.2 million people. The park is designed to remediate past environmental abuses, adapt to future flooding events, and slow years of riverbank erosion. “But I think it’s important while we’re building a park, we’re also helping to build a community,” Susan says. “This will be something that has immense value to the people that live all around it.” 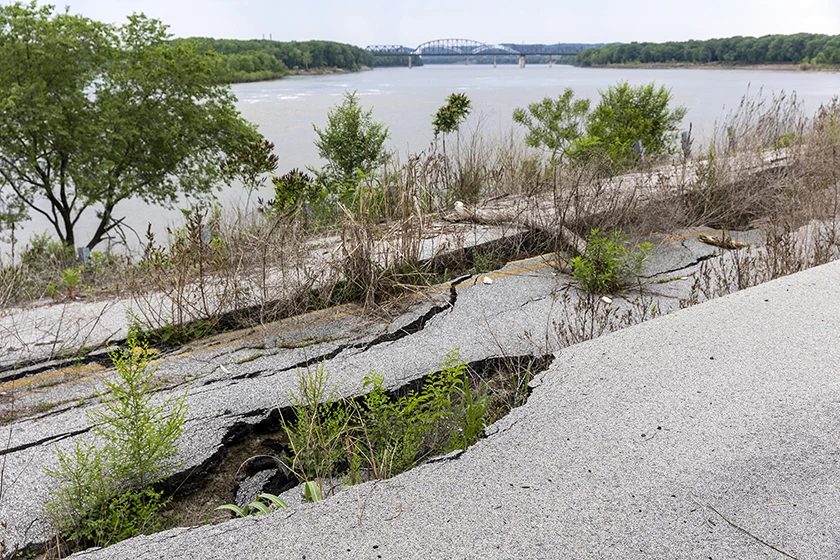 One of the new park’s objectives will be to stop, or at least slow, the riverbank’s erosion.

Origin Park has its beginnings more than 300 million years ago. Exposed fossil beds along the Ohio River’s northern shore are among the largest in the world. They are protected today as part of a national wildlife conservation area. Until European settlers arrived in what used to be known as the Northwest Territories, Indigenous people had been living in southern Indiana for thousands of years.

George Rogers Clark settled near the river in 1803, on 150,000 acres of land awarded to him by the state of Virginia for his service in the Revolutionary War. His younger brother, William Clark, met Meriwether Lewis here and they departed together, on their way to exploring the western frontier. The site of the elder Clark’s homestead is adjacent to Origin Park, with views of the Ohio River and the city of Louisville.

The historic site was also a stopping point on the Underground Railroad as enslaved people found freedom on Indiana soil. The future park was also the location of at least four duels, all involving Kentuckians, including American statesman Henry Clay. None of the participants were killed, although a few were injured. 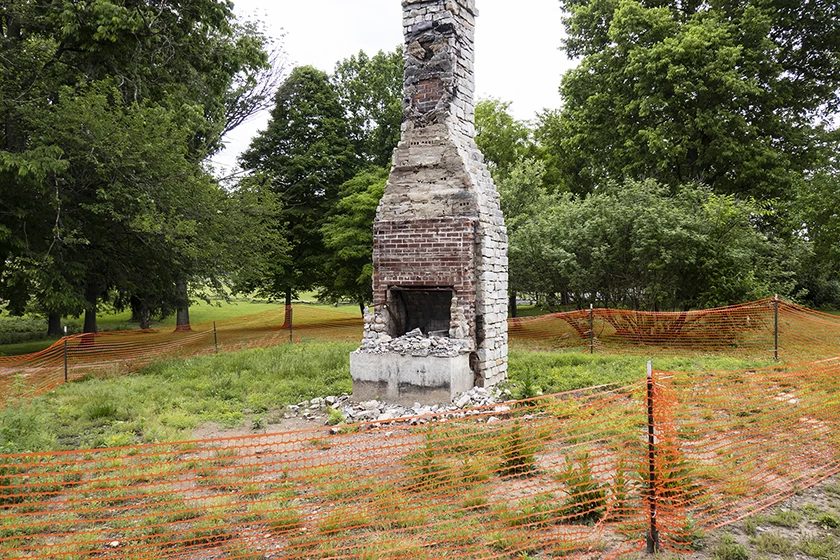 A period-correct log cabin at the site of George Rogers Clark’s home was recently destroyed by arson.

The first phase of Origin Park’s construction has already begun. A canoe and kayak launch point is being readied on a waterway that connects to the river. Expected to be finished sometime next year, a welcome center will provide space for events and offices. Until then, Susan and her two-person staff will continue to work in the nearby basement of an old Carnegie library. Designed to be environmentally adaptable and financially sustainable, the park’s completion is years away, with a price tag projected to be at least $130 million.

But before the welcome center opens its doors, the streams are restored and the network of trails completed, there are still a number of private parcels within the park’s boundaries that will need to be returned to their natural state. Some parts of the post-industrial wasteland of junk yards and landfills have already been purchased. Negotiations are underway for the rest. The few scattered homes on the site may remain occupied by their owners, at least for the time being.

Susan Rademacher eases away from Marshall’s New & Used Auto Parts, steering back onto the narrow lane, passing tall grass on one side and a thicket of trees on the other. “This is all part of the park,” she says with a wave of her hand. “These things really will take time.” 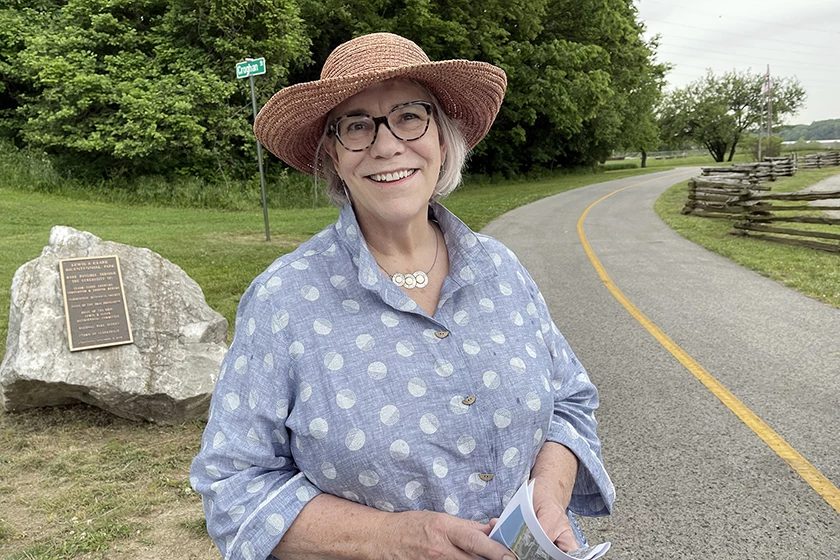 Susan Rademacher: “There are really good examples around the country of resilient design. But maybe not so many climate-adaptive parks.”

Soon she is upon another salvage yard, this one surrounded by weathered stockade fencing. A stop sign has been painted over and repurposed, warning visitors to keep out. “I don’t know if they’re friendly,” Susan says. “But I mean, it’s got some really cool cars.”

A short distance away, Susan points out yet another plot of land strewn with cars and trucks in various states of repair. This property has already been purchased and the owner will vacate within a few months. “We went to see him and had a real nice visit,” Susan says. “And a day or two later, he came to our office with a tray of cookies that his mother had made for us. Such a wonderful example of the friendliness that we’ve found.” 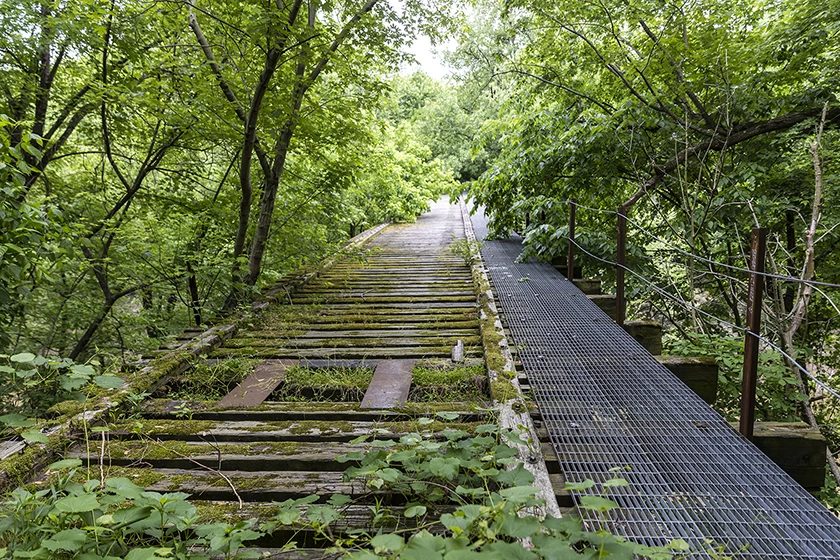 An abandoned bridge is left over from the area’s industrial past.

Moments later, Susan steers onto the vestiges of a dirt road. She decides to stop and turn around when a wide pool of water blocks her path. In the distance, a large dump truck is emptying its contents atop a landfill known locally as Marrs Mountain, after the family that owns it. At least for now. “We have a purchase agreement that goes into effect in 2024,” says Susan as the empty truck trundles back down the hill.

Thick brush covers a bank on the opposite side of the road, leading up to an abandoned rail right of way. Several yards down the missing tracks, an unoccupied homeless encampment is attached to a graffiti-covered cement barrier. The abandoned bridge beyond passes over a planned canoe and kayak waterway.

Susan has one more stop to make before leaving this unkempt part of the future park. Known as “the fish camp,” a vintage streetcar is perched at the edge of a riverside bluff, teetering atop a half dozen concrete piers. Louisville can be seen in the distance, beyond a row of water-churning hydro-electric dams jutting into the Ohio. “It’s pretty charming,” says Susan of the repurposed car. “We’re hoping that we can buy it when we buy the parcel.” 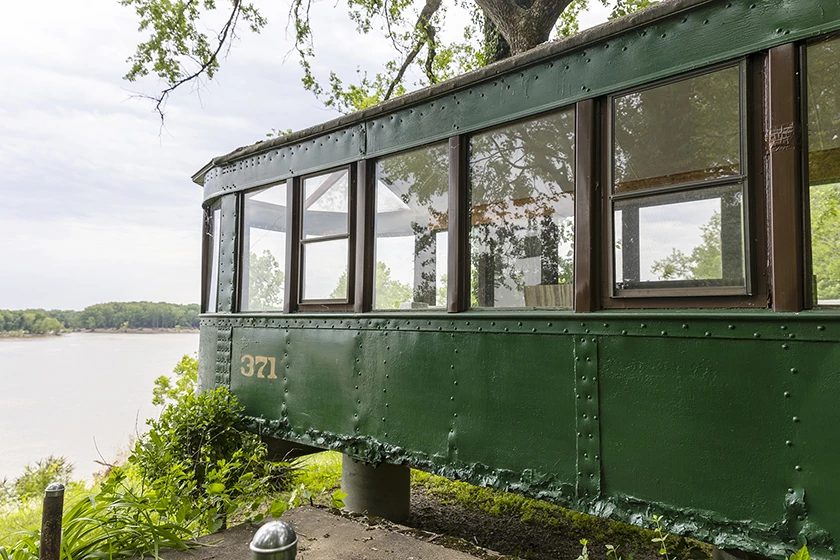 A repurposed streetcar may remain as a feature of the new park.

Origin Park may end up not only reacquainting people with nature, but also with each other. The people of New Albany, Clarksville, Jeffersonville and Louisville, too, all stand to benefit from the new park. “It can’t be a self-contained private development, because it’s a public park,” says Susan. “It has to be accountable to local governments.

“The political context of the three different municipalities and their historical differences and rivalries makes it on the one hand more challenging, but on the other hand, more freeing to do what we need to do to make this park come to life. My hope is that those political rivalries will become obsolete in the making of the park, because the park will be in everybody’s best interest.”

Republished with permission from Governing Magazine, by David Kidd