Election Officials Have Become Targets of Intimidation and Threats

Election Officials Have Become Targets of Intimidation and Threats

Dissatisfied voters targeted election officials in 2020. Accustomed to working behind the scenes, many were cast as villains and now fear for their personal and professional safety.

Reprinted with permission from Governing, by Carl Smith

One in three election officials feel unsafe because of their job. Almost one in five count threats against their lives among their job-related concerns, and one in six have been targeted by personal threats.

These are some of the revelations from extensive interviews conducted in a cooperative project between the Brennan Center for Justice, the Bipartisan Policy Center (BPC) and Harvard Kennedy School’s Ash Center for Democratic Governance and Innovation. Their findings are published in a new report: Election Officials Under Attack: How to Protect Administrators and Safeguard Democracy.

In 2020, election officials worked under challenging conditions to carry out a safe and secure election during the pandemic. Yet months after Congress certified the results, they are still being accused of undermining democracy and the constitution.

“Nobody living has been through this kind of situation, and yet they pulled it off,” says Gowri Ramachandran, counsel for the Brennan Center and one of the authors of the report. “A lot of officials told us that it is particularly stinging and disheartening to be accused of these things when it’s really the opposite that is true.” 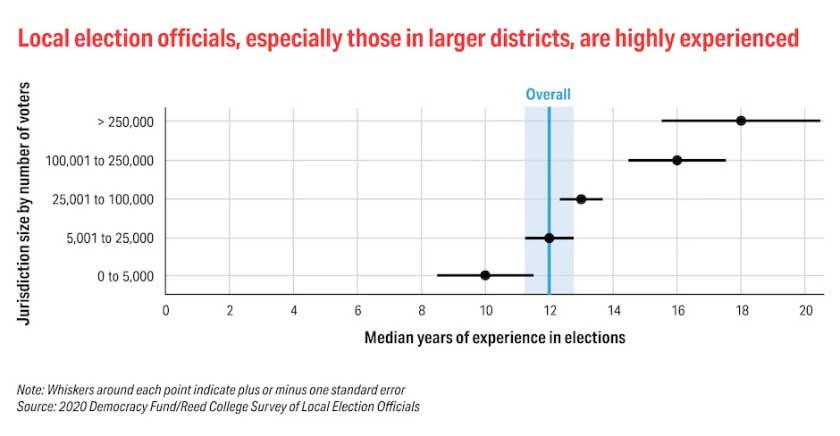 Nearly three quarters of local election officials are over 50, and one in four is over 65. More than half in the largest jurisdictions will be eligible to retire before the next presidential election. Just 45 percent of them intend to do so, according to a 2020 survey, but across all age groups nearly one in four plan to leave the profession in the next four years. Another 29 percent are unsure about their plans.

Election scholar Paul Gronke of Reed College refers to election officials as “stewards of democracy,” and the combination of an aging workforce and a hostile work environment is a threat to civic health. Election Officials Under Attack examines the key challenges that election officials face at this time and proposes remedies for them.

“There are reasonable, implementable solutions that will safeguard our elections going forward and the recommendations in this report are developed with the direct input and participation of election officials from across the country,” said Matthew Weil, director of the Elections Project at BPC.

In a disturbing video, election officials from around the country talk about the threats that they and their families have experienced in the past year.

Three of the challenges identified in the report comprise a toxic feedback loop: disinformation, partisan pressure and threats of violence.

Falsehoods and unsupported accusations were already spreading online months before the election took place, often emanating from elected officials with large followings. On social media, false news is the most popular news of all. A study by MIT researchers, published in Science, looked at 11 years of Twitter behavior and found that users were 70 percent more likely to share false news than true.

Moreover, false political news diffused deeper and more quickly than all other types of false news, reaching twice as many people three times faster. The scientists placed the blame for this on people, not Internet robots. (A Rand report outlined techniques Russian operatives were likely using to increase the political noise.)

Al Schmidt, a member of the Philadelphia City Commission, compared its efforts to respond to viral election disinformation to “shouting into a storm” at a recent virtual summit hosted by the Brennan Center, BPC and the Ash Center. He was encouraged when social media companies began to tag such posts, but that ended when he realized the tag simply said that the content was “disputed.”

“There’s no dispute, it’s categorically false and a lie with no basis,” he said. Flags went from being encouraging to being frustrating almost immediately.

Schmidt, a Republican, experienced the worst effects of social media vitriol after the former president accused him of being a RINO (Republican in name only) who was ignoring election “corruption” in his city. He and his wife both received death threats the next day, naming his sons and daughters, and threats continued for months.

The narratives behind the hostility displayed to Schmidt and others have fueled attempts to exert unprecedented partisan pressure on election officials, from the enforcement of an unconventional audit in Arizona’s Maricopa County by the state Senate, to the censure of Nevada’s Republican secretary of state by her own party and even the defunding of election administration.

Ramachandran and her co-authors outline numerous remedies for each of these challenges. These include the creation of a task force by the Department of Justice to investigate and prosecute threats and laws to protect the personal information of election officials. One strategy proposed to combat disinformation is the compilation of a directory of election officials that could be used by Internet platforms to amplify information from them.

Reducing partisan conflicts may require structural changes to election administration, they suggest, and guaranteed minimum funding that is outside the line of fire, along with other reforms. 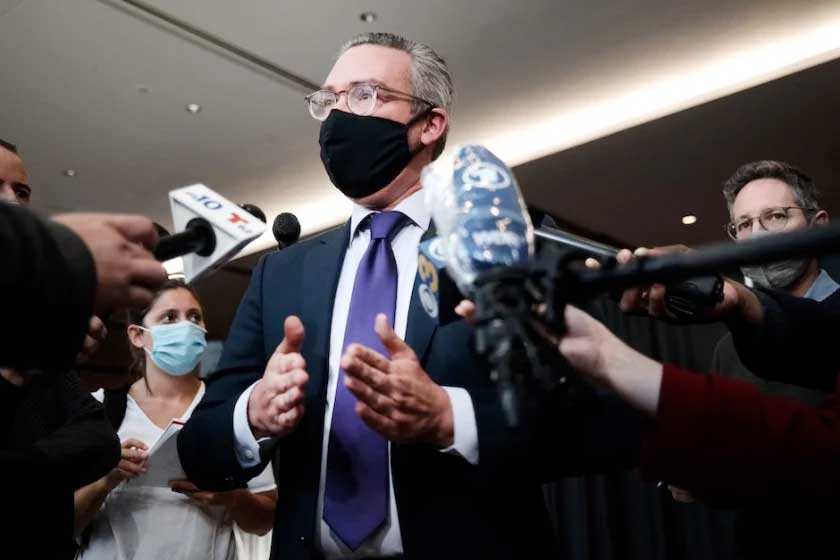 Philadelphia Commissioner Al Schmidt speaks to the media about the vote counting process in the state of Pennsylvania on November 04, 2020 in Philadelphia, Pennsylvania. (Spencer Platt/Getty Images/TNS)

At $50,000, the salary for a local election official is $20,000 less than that for comparable positions elsewhere in government. In small jurisdictions, salaries can be as low as $20,000.

This is out of alignment with both their responsibilities and the hours they devote to fulfilling them. Election officials can wear multiple hats, and summit participants spoke of work weeks as long as 80 hours during the months leading up to an election.

Working conditions for election officials have to take their humanity into account, according to attorney Lisa Danetz, a consultant to the Brennan Center. “In our interviews, we heard from multiple folks about inability to take vacation; one local election official who had to put on four elections every year had two and a half years’ worth of unused vacation time — that’s not sustainable.”

The report outlines a variety of ways to make the profession more appealing, such as pay parity, sharing staff with other jurisdictions, fellowships and apprenticeships and training to help staff deal with harassment should it occur.

A Risk to Democracy

It’s too early to predict whether the challenges identified in Election Officials Under Attack will cause more people to leave the profession or make it harder to recruit people into it, says the Brennan Center’s Ramachandran. The risk of doing nothing is too big to take, though, as it’s a risk to democracy itself.

“We should really invest resources to solve this problem, and make sure that election officials feel safe, that they’re supported, that this job is well paid and resourced the way it needs to be to be done well,” she says. “That way we don’t have to take that risk of not having the honest and experienced people we need on our elections.”