The consequences of inadequate infrastructure maintenance are compounded by climate change, which is accelerating failures with increased flooding, extreme heat and growing storm intensity.

The 1960s and 1970s were a golden age of infrastructure development in the U.S., with the expansion of the interstate system and widespread construction of new water treatment, wastewater and flood control systems reflecting national priorities in public health and national defense. But infrastructure requires maintenance, and, eventually, it has to be replaced.

That hasn’t been happening in many parts of the country. Increasingly, extreme heat and storms are putting roads, bridges, water systems and other infrastructure under stress.

Two recent examples—an intense heat wave that pushed California’s power grid to its limits in September 2022, and the failure of the water system in Jackson, Mississippi, amid flooding in August—show how a growing maintenance backlog and increasing climate change are turning the 2020s and 2030s into a golden age of infrastructure failure.

I am a civil engineer whose work focuses on the impacts of climate change on infrastructure. Often, low-income communities and communities of color like Jackson see the least investment in infrastructure replacements and repairs.

The United States is consistently falling short on funding infrastructure maintenance. A report by former Federal Reserve Board Chairman Paul Volcker’s Volcker Alliance in 2019 estimated the U.S. has a US$1 trillion backlog of needed repairs.

Over 220,000 bridges across the country—about 33% of the total—require rehabilitation or replacement.

A water main break now occurs somewhere in the U.S. every two minutes, and an estimated 6 million gallons of treated water are lost each day. This is happening at the same time the western United States is implementing water restrictions amid the driest 20-year span in 1,200 years. Similarly, drinking water distribution in the United States relies on over 2 million miles of pipes that have limited life spans. 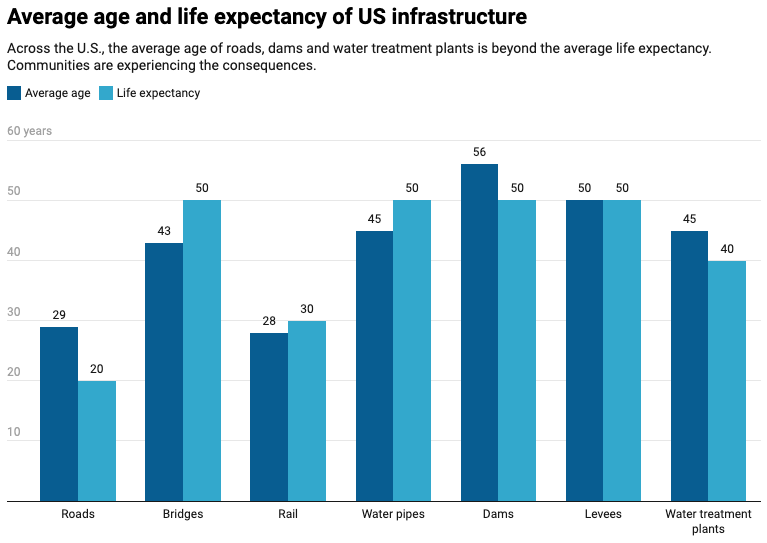 The underlying issue for infrastructure failure is age, resulting in the failure of critical parts such as pumps and motors.

Aging systems have been blamed for failures of the water system in Jackson, wastewater treatment plants in Baltimore that leaked dangerous amounts of sewage into the Chesapeake Bay and dam failures in Michigan that have resulted in widespread damage and evacuations.

Compounding the problem of age is the lack of funds to modernize critical systems and perform essential maintenance. Fixing that will require systemic change.

Infrastructure is primarily a city and county responsibility financed through local taxes. However, these entities are also dependent on state and federal funds. As populations increase and development expands, local governments have cumulatively had to double their infrastructure spending since the 1950s, while federal sources remained mostly flat. Over 2 million people in the United States lack access to safe drinking water and basic sanitation. The greatest predictor of those who lack this access is race: 5.8% of Native American households lack access, while only 0.3% of white households lack access. In terms of sanitation, studies in predominantly African American counties have found disproportionate impacts from nonworking sewage systems. 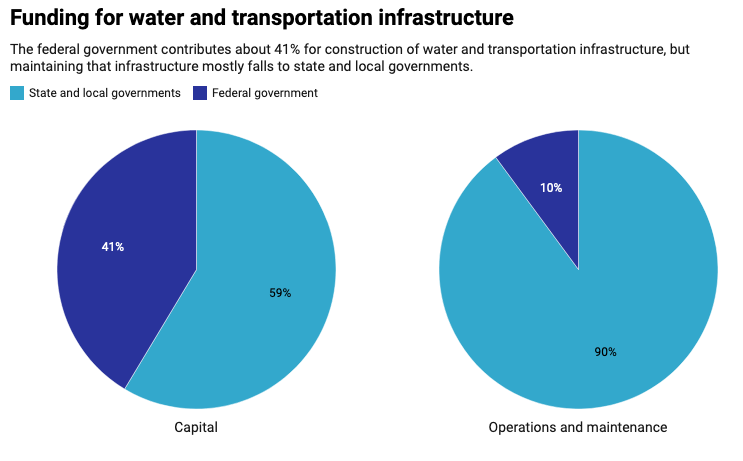 Jackson, a majority-Black state capital, has dealt with water system breakdowns for years and has repeatedly requested infrastructure funding from the state to upgrade its struggling water treatment plants.

The consequences of inadequate maintenance are compounded by climate change, which is accelerating infrastructure failure with increased flooding, extreme heat and growing storm intensity.

Much of the world’s infrastructure was designed for an environment that no longer exists. The historic precipitation levels, temperature profiles, extreme weather events and storm surge levels those systems were designed and built to handle are now exceeded on a regular basis.

Unprecedented rainfall in the California desert in 2015 tore apart a bridge over Interstate 10, one of the state’s most important east-west routes. Temperatures near 120 degrees Fahrenheit (49 C) forced the Phoenix airport to cancel flights in 2017 out of concern the planes might not be able to safely take off.

A heat wave in the Pacific Northwest in 2020 buckled roads and melted streetcar cables in Portland. Amtrak slowed its train speeds in the Northeast in July 2022 out of concern that a heat wave would cause the overhead wires to expand and sag and rails to potentially buckle.

The Rising Costs of Delayed Repairs

My research with colleagues shows that the vulnerability of the national transportation system, energy distribution system, water treatment facilities and coastal infrastructure will significantly increase over the next decade due to climate change.

We estimate that rail infrastructure faces additional repair costs of $5 billion to $10 billion annually by 2050, while road repairs due to temperature increases could reach a cumulative $200 billion to $300 billion by the end of the century. Similarly, water utilities are facing the possibility of a trillion-dollar price tag by 2050. 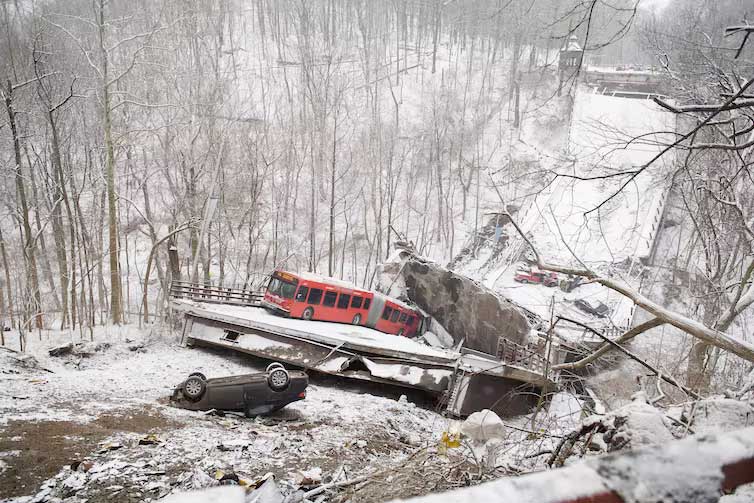 A city bus was caught and several people were injured when a bridge collapsed in Pittsburgh in January 2022. Jeff Swensen/Getty Images

After studying the issue of climate change impacts on infrastructure for two decades, with climate projections getting worse, not better, I believe addressing the multiple challenges to the nation’s infrastructure requires systemic change.

Two items are at the top of the list: national prioritization and funding.

Prioritizing the infrastructure challenge is essential to bring government responsibilities into the national conversation. Most local jurisdictions simply can’t afford to absorb the cost of needed infrastructure. The recent infrastructure bill and the Inflation Reduction Act are starting points, but they still fall short of fixing the long-term issue.

Without systemic change Jackson, Mississippi,will be just the start of an escalating trend.

Republished with permission from The Conversation, by Paul Chinowsky, Professor of Civil Engineering, University of Colorado Boulder