Atmospheric rivers occur globally, affecting the west coasts of the world’s major land masses, including Portugal, Western Europe, Chile and South Africa. So-called “Pineapple Express” storms that carry moisture from Hawaii to the U.S. West Coast are just one of their many flavors.

Republished with permission from The Conversation, by Tom Corringham, University of California San Diego

Ask people to name the world’s largest river, and most will probably guess that it’s the Amazon, the Nile or the Mississippi. In fact, some of Earth’s largest rivers are in the sky – and they can produce powerful storms, like the ones now drenching northern California.

Atmospheric rivers are long, narrow bands of moisture in the atmosphere that extend from the tropics to higher latitudes. These rivers in the sky can transport 15 times the volume of the Mississippi River.

When that moisture reaches the coast and moves inland, it rises over the mountains, generating rain and snowfall. Many fire-weary westerners welcome these deluges, but atmospheric rivers can trigger other disasters, such as extreme flooding and debris flows. 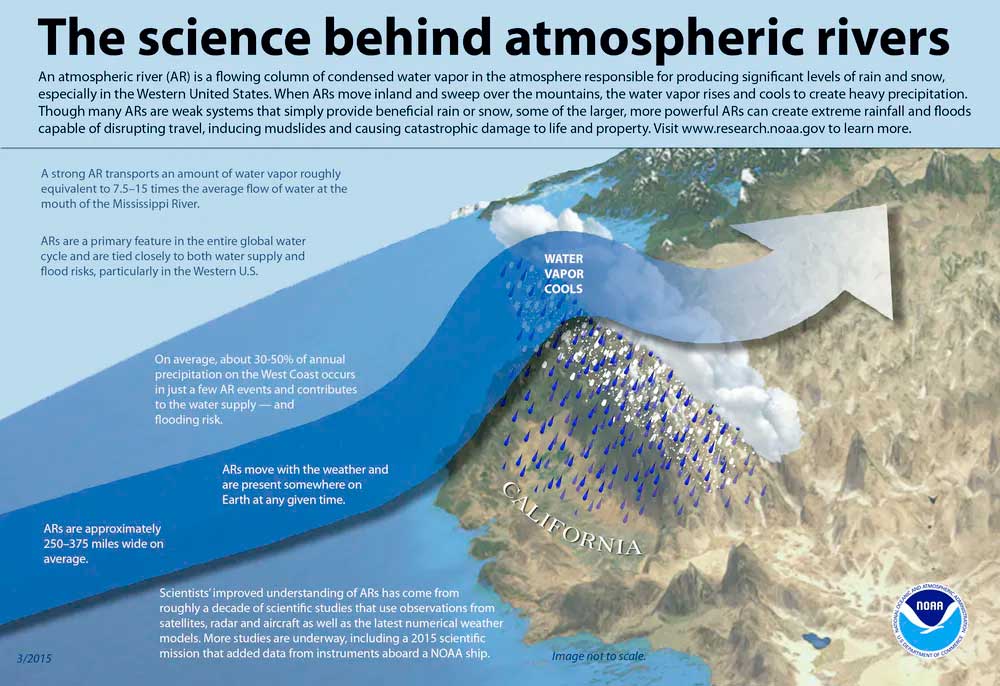 Atmospheric rivers are an important water source for the U.S. West. NOAA

In the past 20 years, as observation networks have improved, scientists have learned more about these important weather phenomena. Atmospheric rivers occur globally, affecting the west coasts of the world’s major land masses, including Portugal, Western Europe, Chile and South Africa. So-called “Pineapple Express” storms that carry moisture from Hawaii to the U.S. West Coast are just one of their many flavors.

My research combines economics and atmospheric science to measure damage from severe weather events. Recently I led a team of researchers from Scripps Institution of Oceanography and the Army Corps of Engineers in the first systematic analysis of damages from atmospheric rivers due to extreme flooding. We found that while many of these events are benign, the largest of them cause most of the flooding damage in the western U.S. And atmospheric rivers are predicted to grow longer, wetter and wider in a warming climate.

Rivers in the Sky

On Feb. 27, 2019, an atmospheric river propelled a plume of water vapor 350 miles wide and 1,600 miles long through the sky from the tropical North Pacific Ocean to the coast of Northern California.

For the fifth time in four decades, the town of Guerneville was submerged under the murky brown floodwaters of the lower Russian River. Damages in Sonoma County alone were estimated at over US$100 million.

Events like these have drawn attention in recent years, but atmospheric rivers are not new. They have meandered through the sky for millions of years, transporting water vapor from the equator toward the poles.

In the 1960s meteorologists coined the phrase “Pineapple Express” to describe storm tracks that originated near Hawaii and carried warm water vapor to the coast of North America. By the late 1990s atmospheric scientists had found that over 90% of the world’s moisture from the tropics and subtropics was transported to higher latitudes by similar systems, which they named “atmospheric rivers.”

In dry conditions, atmospheric rivers can replenish water supplies and quench dangerous wildfires. In wet conditions, they can cause damaging floods and debris flows, wreaking havoc on local economies. 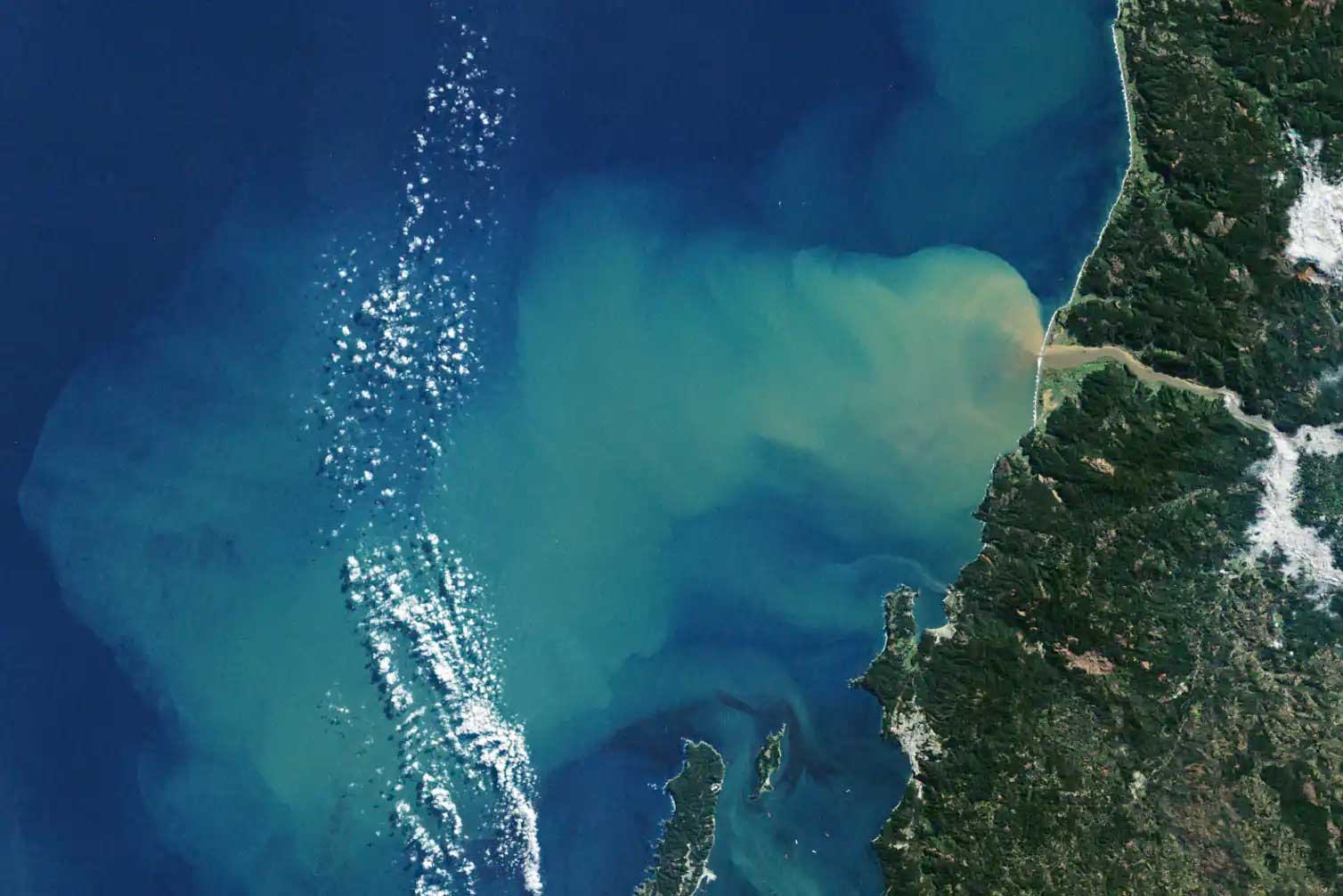 After an atmospheric river event that caused severe flooding in Chile, sediment washed down from hillsides into the Itata River can be seen flowing up to 50 kilometers from the coast. NASA Earth Observatory

Researchers have known for some time that flooding due to atmospheric rivers could cost a lot of money, but until our study no one had quantified these damages. We used a catalog of atmospheric river events compiled by Scripps Institution of Oceanography’s Center for Western Weather and Water Extremes, and matched it to 40 years of flood insurance records and 20 years of National Weather Service damage estimates.

We found that atmospheric rivers caused an average of $1.1 billion in flood damages yearly in the western U.S. More than 80% of all flooding damages in the West in the years we studied were associated with atmospheric rivers. In some areas, such as coastal northern California, these systems caused over 99% of damages.

Our data showed that in an average year, about 40 atmospheric rivers made landfall along the Pacific coast somewhere between Baja California and British Columbia. Most of these events were benign: About half caused no insured losses, and these storms replenished the region’s water supply.

But there were a number of exceptions. We used a recently developed atmospheric river classification scale that ranks the storms from 1 to 5, similar to systems for categorizing hurricanes and tornadoes. There was a clear link between these categories and observed damages.

Atmospheric River category 1 (AR1) and AR2 storms caused estimated damages under $1 million. AR4 and AR5 storms caused median damages in the 10s and 100s of millions of dollars respectively. The most damaging AR4s and AR5s generated impacts of over $1 billion per storm. These billion-dollar storms occurred every three to four years.

Our most significant finding was an exponential relationship between the intensity of atmospheric rivers and the flood damages they caused. Each increase in the scale from 1 to 5 was associated with a 10-fold increase in damages.

Several recent studies have modeled how atmospheric rivers will change in the coming decades. The mechanism is simple: Greenhouse gases trap heat in the atmosphere, warming the planet. This causes more water to evaporate from oceans and lakes, and increased moisture in the air makes storm systems grow stronger.

Like hurricanes, atmospheric rivers are projected to grow longer, wider and wetter in a warming climate. Our finding that damages increase exponentially with intensity suggests that even modest increases in atmospheric river intensity could lead to significantly larger economic impacts.

I believe that improving atmospheric forecasting systems should be a priority for adapting to a changing climate. Better understanding of atmospheric rivers’ intensity, duration and landfall locations can provide valuable information to residents and emergency responders.

It also is important to discourage new construction in high-risk areas and help people move to safer locations after major disasters, rather than rebuilding in place.

Finally, our study underlines the need to reduce global greenhouse gas emissions. These storms will keep coming, and they’re getting stronger. In my view, stabilizing the global climate system is the only long-term way to minimize economic damage and risk to vulnerable communities.