Dark Money Groups Have Spent $1 Billion to Retake the Senate, So Far

Dark Money Groups Have Spent $1 Billion to Retake the Senate, So Far

This finding comes a month after Senate Republicans tanked a bill that would have required dark money groups to disclose their donors and funding sources.

Shadowy organizations that are legally allowed to hide their donors have pumped nearly $1 billion into the Republican Party’s effort to retake the U.S. Senate, according to an NPR analysis released Saturday.

In total, NPR found that “more than $1.6 billion has been spent or booked on TV ads in a dozen Senate races, with $3 out of every $4 being spent in six states—Georgia, Pennsylvania, Arizona, Wisconsin, Nevada, and Ohio.”

“Most of that money is coming from dark money outside groups with little-to-no donor transparency—and Republicans are getting a huge boost from them,” the outlet reported.

Nearly 90% of the money spent on pro-Republican television ads this midterm cycle has been from dark money groups, according to NPR‘s analysis of ad data. By comparison, 55% of spending on ads boosting Democrats has come from dark money organizations, which have exploded in number and influence since the U.S. Supreme Court’s 2010 Citizens United decision.

Predictably, key battleground states such as Georgia, Pennsylvania, and Arizona have drawn massive ad spending from outside groups in recent months as Senate races there tighten with just over two weeks until the November midterms.

Outside organizations have poured more money into Pennsylvania—where Democratic Lt. Gov. John Fetterman is locked in a competitive Senate contest with Republican nominee Dr. Oz—than any other state this cycle.

“Outside groups have spent nearly $64.9 million to back Fetterman or sway voters away from the celebrity doctor, while conservative outside spenders have poured $66 million into the race,” OpenSecrets noted Friday. “One of the top outside spenders is the Senate Leadership Fund, a super PAC aligned with Senate Minority Leader Mitch McConnell (R–Ky.). The super PAC has made Fetterman their top target, spending almost $37.2 million to oppose the Democrat.” 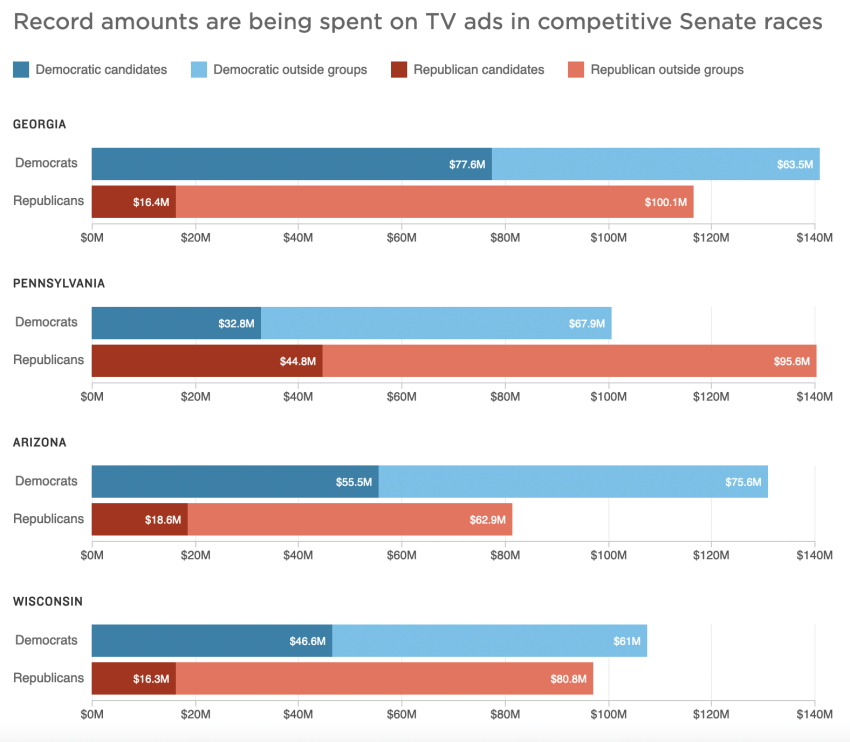 NPR‘s analysis came a month after Senate Republicans unanimously voted down legislation that would have required dark money organizations to disclose their large donors and funding sources, a step that would shine light on the forces attempting to sway critical races.

“The group, Citizens for Sanity, has paid for billboards emblazoned with messages like ‘Protect Pregnant Men from Climate Discrimination’ and ‘Real progressives support violent criminals in their hour of need’ in states across the country—including Massachusetts, Colorado, Arizona, Nevada, Pennsylvania, California, Michigan, Texas, Illinois, and Georgia,” the watchdog noted. “The ads have been described as racist and transphobic.”