A general view during the inauguration of a green-tech “REFHYNE” hydrogen production plant at the Shell Energy and Chemicals Park Rheinland on July 02, 2021 in Wesseling, Germany. (Photo by Andreas Rentz/Getty Images)

A general view during the inauguration of a green-tech “REFHYNE” hydrogen production plant at the Shell Energy and Chemicals Park Rheinland on July 02, 2021 in Wesseling, Germany. (Photo by Andreas Rentz/Getty Images)

Colorado is leading a four-state collaboration to develop alternate fuel technology based on hydrogen—which releases no carbon emissions when burned and could be a major part of addressing hard-to-decarbonize portions of the economy.

Across the country, states are inking agreements with neighbors or striking out on their own to pursue billions in federal funding to set up “hydrogen hubs,” clustered centers for production, storage and use of the gas that many see as a crucial piece of the puzzle for decarbonizing the U.S. economy.

How broad a role it should play, however, is a matter of debate.

“The H2Hubs will be a central driver in helping communities across the country benefit from clean energy investments, good-paying jobs and improved energy security—all while supporting President Biden’s goal of a net-zero carbon economy by 2050,” the department said in a news release last month, calling the federal cash infusion one of the largest in the DOE’s history.

“Some states are going to be motivated by climate goals. Hydrogen is an important tool for achieving those climate goals,” said Bryan Willson, a professor of mechanical engineering and executive director of the Energy Institute at Colorado State University. “Others are really motivated by economic development and hydrogen represents a tremendous new business opportunity.”

Willson is also the director of the Rocky Mountain Alliance for Next Generation Energy, which is made up of universities and national labs from four western states that are providing technical support to the effort to create the Western Interstate Hydrogen Hub, a collaboration between Colorado, New Mexico, Utah and Wyoming, two red states and two blue ones. 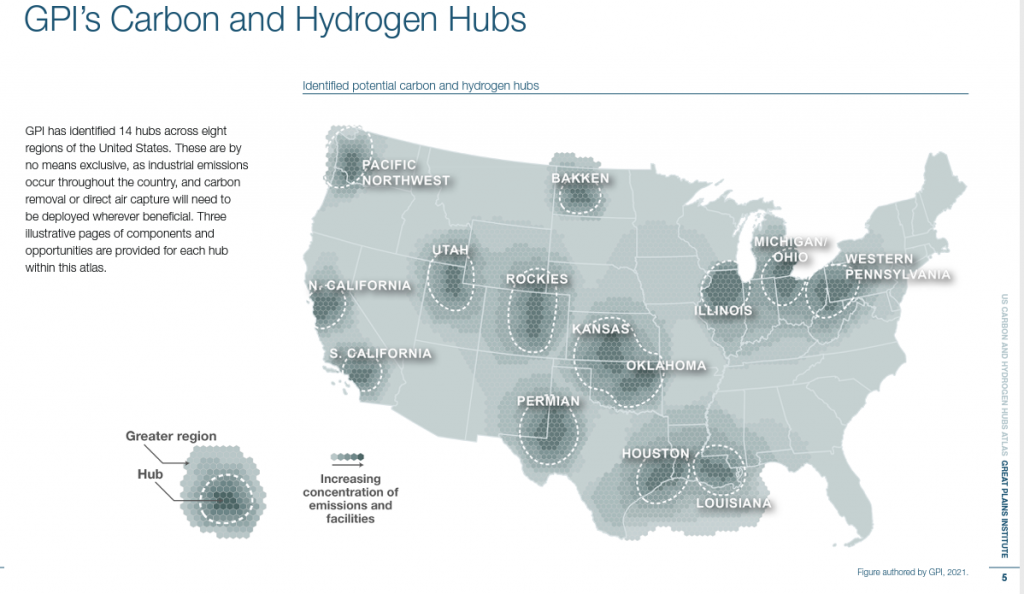 Matt Fry, a senior policy manager focusing on carbon management at the nonprofit Great Plains Institute and a former adviser to Republican Wyoming Gov. Matt Mead, said even conservative states have come around on the need to capture carbon and the obvious effects of a changing climate.

“We know that this is what we’re going to have to do,” he said. “We’ll utilize hydrogen as we bridge from a more fossil-fuel-based economy to a more electrified economy.”

Similar hub agreements have been made between Louisiana, Oklahoma and Arkansas; Minnesota, Montana, North Dakota and Wisconsin and Connecticut, Massachusetts, New Jersey and New York. Minnesota and Wisconsin also have a separate memorandum of understanding with Illinois, Indiana, Kentucky, Michigan and Ohio aimed at “accelerating and improving” clean hydrogen production. And Oregon and Washington are also collaborating to create a Pacific Northwest hub.

Other states, like Pennsylvania and Georgia, have launched efforts to create hubs on their own.

“The hubs are trying to focus on areas where you have resources to produce it, resources to use it and resources to balance that supply and demand,” said Jeffery Preece, director of research and development at the Electric Power Research Institute.

“We’re still working on where and how to deploy hydrogen in a decarbonized future. It’s important to bring stakeholders together … to figure this out. Getting it focused in hubs helps to really find those ways where we’re challenged with limitations on infrastructure today.”

There’s a consensus that hydrogen, which releases no carbon emissions when burned, could be a major part of addressing hard-to-decarbonize portions of the economy in which electrification isn’t feasible, including shipping, aviation, heavy ground transportation like rail and industry, such as steelmaking and cement. Hydrogen fuel cells can power heavy vehicles like long-haul tractor-trailers which need greater range than batteries can currently provide or hydrogen can be used to produce fuels compatible with existing internal combustion engines.

It can also be blended — up to a certain point currently — with natural gas to burn in gas turbines for electric generation. In what it called the largest test of its kind, Georgia Power reported in June that it was able to burn a 20% hydrogen blend in one of the turbines at its Plant McDonough-Atkinson natural gas power plant outside Atlanta, achieving a 7% reduction in CO2 emissions.

“We are probably the most aggressive state in terms of decarbonization. Along with that we have increasing needs for storage and hydrogen basically gives the ability to fill in the gaps when the wind doesn’t blow and the sun doesn’t shine,” Willson of Colorado State University said.

But how clean hydrogen is depends on how it’s produced. Right now most hydrogen in the U.S. is produced using steam-methane reforming via natural gas, so-called “grey” hydrogen. “Green” hydrogen is produced by an electrolysis process with clean energy. “Blue” hydrogen is fossil-fuel derived but coupled with carbon capture, in which CO2 that would normally go up a smokestack or flue is filtered out of emissions and stored underground, though there are increasingly more efforts to find beneficial uses for that carbon. 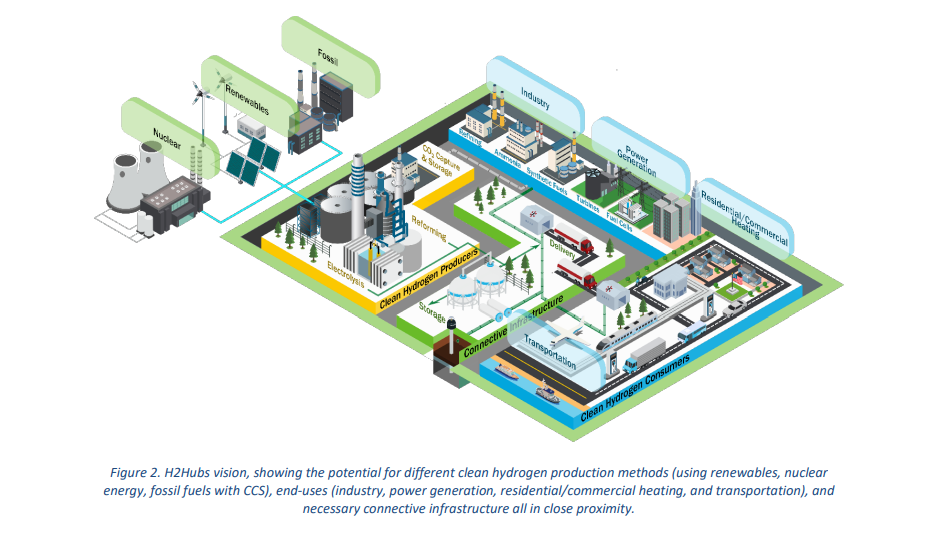 A vision for how hydrogen hubs could work (U.S. Department of Energy)

There’s precious little green or blue hydrogen being produced at the moment, but Willson said the money for hydrogen hubs, production tax credits and the Department of Energy’s “hydrogen shot,” an initiative to reduce the cost of hydrogen produced from renewable energy from the current cost of about $5 per kilogram to $1 per kilogram over the next decade, could change that.

“Right now there’s no question that hydrogen from fossil resources is cheaper,” he said. “But as the cost of renewables continues to drop and the cost of hydrogen continues to come down, the case for green hydrogen becomes pretty compelling.”

Given that dynamic though, environmental groups worry that pushing to use hydrogen in scenarios in which renewable power and electrification (such as for home heating and appliances like stoves) make more sense could wind up prolonging the life of fossil fuels, particularly natural gas.

“In general when it comes to hydrogen we feel that there are some good opportunities there and there are also some very bad possibilities depending on how this is implemented,” said Patrick Drupp, the Sierra Club’s deputy legislative director for climate and clean air.

Drupp noted that the political wrangling over the infrastructure bill produced some constraints for the Department of Energy as it evaluates hydrogen hub proposals.

“Certain things were mandated in the legislation that we don’t agree with,” he said. “The DOE should focus on things where hydrogen has the best possible outcomes.”

For example, at least one hub must demonstrate the production of hydrogen from fossil fuels (with carbon capture), one must be from nuclear and one must be from renewable energy. They must also be located in different regions of the U.S. “and shall use energy resources that are abundant in that region, including at least two H2Hubs in regions with abundant natural gas resources,” DOE documents state.

Building out a large hydrogen economy, with its unique storage and transportation requirements, Drupp noted, will require expensive infrastructure like new pipelines to handle high concentrations of hydrogen being blendedinto the natural gas system.

As of March, natural gas and electric utilities had proposed more than two dozen pilot projects related to producing and distributing hydrogen for electric generation, heating buildings or other uses, according to a report by Energy Innovation, Policy & Technology, a nonpartisan energy and climate policy think tank. Blending hydrogen with natural gas for those purposes would do little to curb greenhouse gas emissions and might “thwart more viable decarbonization pathways while increasing consumer costs, exacerbating air pollution and imposing safety risks,” the report warned.

“There’s a lot of money out there,” Drupp said. “The gas industry sees the writing on the wall and sees this as an opportunity to prolong their industry.”

Republished with permission from Colorado Newsline, by Robert Zullo 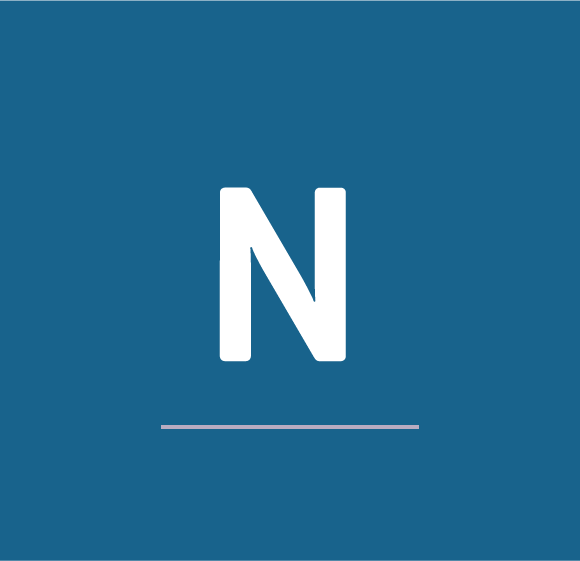 The consequences of inadequate infrastructure maintenance are compounded by climate change, which is accelerating failures with increased flooding, extreme heat and...
Read More