Big Oil might deny accountability for the consequences of their stake in Russia and the payments made to Putin's war chest, but they have always been more than happy to profit from their involvement.

The analysis tracks back to 2014, when Russia annexed Crimea—a region that most countries still consider to be part of Ukraine. Putin launched a full-blown invasion of Ukraine in late February, a war now in its second month.

“While the Russian government has benefited from majority state-owned or state-controlled oil companies such as Gazprom and Rosneft,” the document states, “European and U.S.-based corporations have also spearheaded large oil and gas projects that filled Putin’s coffers.”

The report, which features “BP’s and TotalEnergies’ share of the royalties and taxes paid by the Russian companies, proportional to their equity stakes,” specifically calls out BP, which the researchers say was responsible for over 80% of the $95.4 billion because of its Rosneft stock. Asked to comment on the findings, BP told Global Witness that “we simply do not recognize the numbers you cite or, indeed, any suggestion that BP was somehow ‘responsible for paying’ Russia ‘an estimated $78.4’ billion since 2014.'”

Responding to BP’s statement, the briefing says that “we included these values to provide greater transparency and a full accounting of these companies’ activities in Russia on the principle that a company’s responsibilities are proportional to its share in the companies it owns stakes in, in the same way that the benefits it enjoys are.”

“Although BP has announced it will divest its stake in Rosneft,” the report adds, “the past impact of this equity stake cannot be negated—both in terms of the benefit to Rosneft from the capital provided, and the cash flowing as a result to the Russian state.” 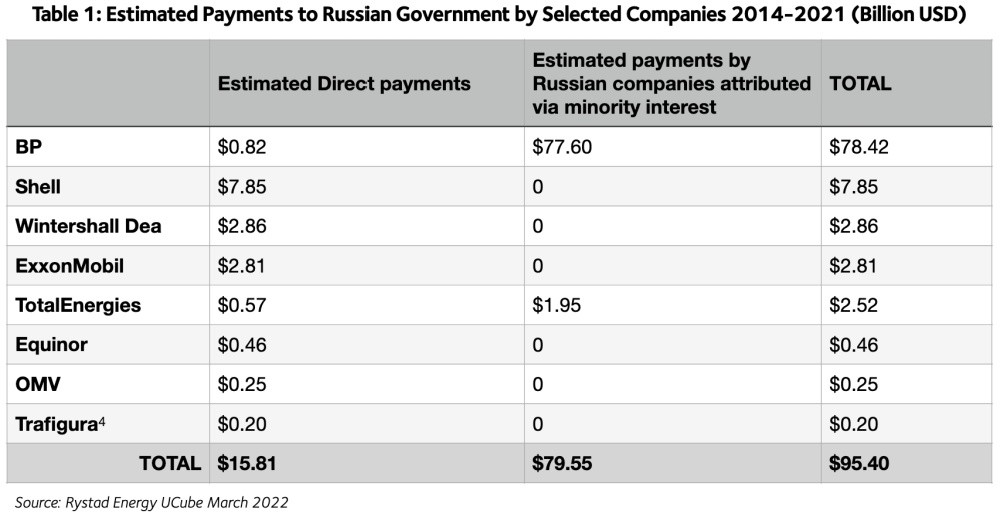 “BP and other big energy companies are now trumpeting their withdrawals from Russia but do they expect us to forget the almost $100 billion they’re responsible for putting into Putin’s pockets in recent years?” asked Murray Worthy, gas campaign leader at Global Witness.

Worthy said that “whilst BP might deny accountability for the consequences of its stake in Rosneft and the payments made to Putin’s war chest, it has always been more than happy to benefit from the billions that have flowed from its involvement in the company.”

“The Russian energy industry is Putin’s biggest earner and companies like BP that turned a blind eye to the Crimean invasion, continuing to support money pouring into his war chest, should surely be questioning whether they now have Ukrainian blood on their hands,” he added.

As for the other companies, a statement from the green groups outlined:

Trafigura stated that it had made no direct payments to the Russian government as a result of its share in an oil project. Equinor, ExxonMobil, OMV, and Total did not dispute the figures provided, Wintershall Dea stated it was not able to verify our findings, and BP, Equinor, OMV and Shell referred to their payments to governments data as part of their annual financial reports. Shell stated that it was unable to provide comment on the figures in this briefing in the time frame proposed.

Campaigners from the groups behind the analysis argued that their findings provide even more evidence of the need to swiftly shift to clean energy.

“Fossil fuels are the currency of despots, dictators, and warmongers,” declared Lorne Stockman, research co-director at Oil Change International. “Our global reliance on oil and gas is not only killing our planet but also making the world a less safe and equal place.”

“Big Western polluters like BP and Shell have been all too happy to work in countries with despicable human rights records for over a century,” Stockman said. “They must avoid looking to other autocratic regimes to replace the resources they have foregone in Russia. Now is the moment to end the fossil fuel era.”

Greenpeace USA research manager Tim Donaghy said that “if we want to build a world based on equity, peace, and stability then we must urgently accelerate the move towards renewable energy.”

“This is the single best way to cut off both the money and soft power yielded by the likes of Putin to carry out the sort of atrocities we are now seeing in Ukraine,” he asserted. “And when energy companies try to fight this transition, politicians should remember the billions of dollars they have given to Putin.”

The report comes not only in the midst of war but also as U.S. President Joe Biden on Friday announced a highly anticipated plan to boost exports of liquefied natural gas (LNG) to European Union countries so they can reduce their reliance on Russian fossil fuels.

“Doubling down on gas is not the solution, whether it comes from Russia or the U.S.,” said Worthy. “Instead of lining the pockets of American fracking companies, Europe should focus its energy investments on lasting solutions such as improving building insulation, heat pumps, and renewable energy sources.”