Racism is rooted in fear, and fear is rooted in what we don’t know and can’t see. It’s not even so much a thought or personal policy. Racism is an involuntary REACTION. And it must, for it’s true power and volition, descend from one who holds the power to one who does not.

I wrote this before Obama’s second election. It is unfortunately still relevant today.

It’s no longer possible or responsible for me to be silent and let things go just to get along. I’m not interested in attacking political parties. My basic policy on Facebook has been to not talk politics or religion. I don’t know if I can do this any more before this election.

Basically certain individuals from the right, primarily, promoted a brilliant campaign to fight against accusations of racism. And the campaign entailed screaming down anyone who mentioned race or anything about racism. And it worked. The accusations seemed to stop. But also what stopped was standing up for your own integrity and self worth in the cheap and covert battle against racist activities just because we were suddenly on the defensive and confused by this tactic, regardless how true it may have been.

Well this and Obama’s last election has really brought out the fear and hate mongering from those afraid of seeing another four years of a president who happens to be HALF black. What gains we may have felt were achieved against racism in America certainly seem squandered, squashed and all but lost.

I was caught off guard and mortified seeing Photoshopped pictures of Obama with a bone thorough the nose sitting naked in a straw hut, or monkey dolls with Obamas name, a poster of a nappy headed Obama with a bucket of chicken and a watermelon saying “Lawdy I sho’ loves campainin!” And just yesterday I saw a guy on a Harley wearing a jacket that said, “Nigger please! It’s the WHITE house!”

And today I saw an image of an Obama lynching. Or, what about those insisting he’s Muslim or a terrorist or wasn’t born in the US. How about the Kansas Speaker Mike O’Neal who sent out an email quoting Psalm 109 to his fellow Republican colleagues, praying Obama’s children would be fatherless, which is tantamount to calling for his assassination.

The hubris and audacity of Arizona Governor Jan Brewer sticking her finger in Obama’s face or representative Joe Wilson yelling “You Lie!” It goes on and on and on. The level of disrespect and hatred is unprecedented. And since the only real variable here is Obama being the first black president, I have to assume that may have more than a little to do with it.

This is beyond him being a Democrat. And he isn’t even close to being the most liberal of presidents; far from it. Many of the biggest bills and policies supported by Obama were prior Republican ones. But now they’re socialist or something. They must see him fail at all costs, even at the expense of the safety and security of our nation. He must fail, Limbaugh and the GOP says.

That from the outset, the primary Republican objective and mandate was to see Obama fail, has to be rooted in far deeper angst. It is so plainly obvious that Col. Wilkerson, GOP Chief of Staff to Colin Powell, admitted his party was racist, and their objective to defeat Obama wasn’t based on his policies, but rather the mere fact that he is black. “Let me just be candid: My party is full of racists. And the real reason a considerable portion of my party wants President Obama out of the White House, has nothing to do with the content of his character, nothing to do with his competence as Commander-in-Chief, and President and everything to do with the color of his skin. And I find this despicable.” I applaud him for having the courage to say this.

I have no problem with those who disagree with Obama’s policies or don’t like him for political reasons. I do not believe disagreeing with Obama makes you a racist. Not in the least. But the level of vitriol, and lacking any kind of reason or intelligence, seems almost unprecedented.

You have to go back a long way to see this kind unbridled hate. Not even with Clinton or Bush. What floors me is the silence from the Republican party about any of this. If you heard more from the GOP leadership calling an end to this ludicrous racist extreme, that would have gone far to quelling the hate and would help in separating the GOP from these factions. But they haven’t done that. The leadership is hoping the extremists will help them defeat Obama, so they remain silent. My only hope is they will be taken down by this stupid and dangerous tactic.

You can only be truly harmed by what you can’t see. This is what’s so harmful about racism. Mostly it’s hidden from view. People won’t cop to it. And most racists have no idea they’re racist. They can’t see it in themselves. They call it something else, or blame you for it. It’s still somewhat hidden, but now it’s peaking out from under the blankets and sheets. Yet it still hides because it’s cowardice, and cowardice is one of the most vile human characteristics. Even with all those bone through the nose posters and email messages, racism’s existence is very often denied by the right and even those very people disseminating those hateful posts. “No, this isn’t racism!” I hear this all the time.

And then the attack: “You people are always pulling the RACE CARD!” WHAT? That’s it. The “race card” defense. Protesting against a misnomer called “political correctness” becomes a license to act like a racist, or a homophobe or a misogynist or a religious bigot, science hater or anyone else who enjoys hating groups of people.

Instead of dealing with it or talking about it most of them will respond by instant attack, telling you how Obama is the one who has introduced racism into the election. I’ve yet to see how exactly he has done this. Or they’ll tell you how racism no longer exists and that this is a post racial America, citing Obama as the first black president. I think his election only brought out the cockroaches. Because they’re so good at hiding we never knew how many there were.

It’s no longer the time to be silent. My heroes were those activists in the 50s and the 60s who marched for my civil rights. They wouldn’t have been silent. Why are we? Why am I?

What troubles me is that the fight for civil rights, for human rights, has always been political; Republican vs Democrat, liberal vs conservative. It shouldn’t be. Treating people with human decency shouldn’t be Republican or Democrat. The good guys and the bad guys can and have changed sides and parties, but the issues remained.

Racism is rooted in fear, and fear is rooted in what we don’t know and can’t see. It’s not even so much a thought or personal policy. Racism is an involuntary REACTION. And it must, for it’s true power and volition, descend from one who holds the power to one who does not. It’s more than differentiating stereotypical, mostly false, characteristics. It’s about who holds power over another and who holds another group as inferior or superior. A lot of people don’t get this point. Yes, a black person can be racist in his manner and points of view, but if you think that’s what it’s about you are missing the most crucial of points.

And racism should never be about political sides. As soon as you chose a side you have to defend it, so any search for truth or real communication, goes out the window at that point.

I’ve always believed if we could conquer racism we could conquer the world’s problems. These problems have common roots. We are all essentially the same as beings; all have similar hopes, dreams, fears, loves and aspirations. Anything that seeks to divide us into false, small insignificant groups is evil because it’s a lie. In truth there are no blacks, whites, yellows, browns; only spiritual beings. As long as people try to divide and compartmentalize us, there will be lies, hidden false veils and war. Only truth can melt a lie. We simply haven’t seen enough truth yet.

For the most part these aren’t evil people. They’re frightened about a world they don’t understand and that’s hitting them square in the face. They didn’t see it coming. It’s CHANGE. For the first time many can see or imagine a time when the white race will be a minority in America and it scares the bejesus out of them. Call it karma. We’ll never get to the other side of this fortress until we decide that it’s time to talk with reason and sanity. It’s time to SEE one another. It’s time to stand up for your own personal integrity and say no, racism is NOT OK. If it’s racism you see, call it for what it is and try and break down those ancient walls and fortresses. They’re crumbling into the sea eventually anyway. 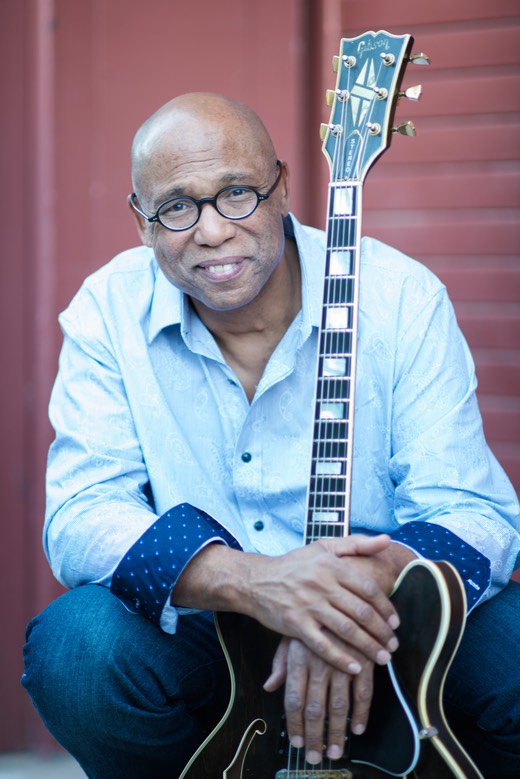 Henry Robinett is a jazz guitarist who plays a variety of, mostly, improvised music. He also writes music, and own sand operates a recording studio. Henry is also a teacher and college professor who taught  at The University of the Pacific and Cosumnes River College and at various star prisons in Northern California.