A police officer drives by Mar-a-Lago on August 9, 2022. Giorgio Viera/AFP via Getty Images

A police officer drives by Mar-a-Lago on August 9, 2022. Giorgio Viera/AFP via Getty Images

The inventory of items taken by the FBI from Mar-a-Lago apparently shows Trump may have violated the Espionage Act, the Public Records statute and engaged in obstruction of justice in a number of different ways.

The FBI recovered confidential and top-secret items from Mar-a-Lago during its Aug. 8, 2022, search of the estate – pointing to former President Donald Trump’s potential violation of several federal laws.

A Florida federal judge – the same one who issued the warrant to search Trump’s estate – ordered on Aug. 12, 2022, that the document be made public – along with an inventory of items seized during the FBI’s raid.

The unsealed documents seem to indicate that the U.S. Department of Justice believes Trump may have violated the Espionage Act, as well as other criminal laws relating to the handling of public records. These Laws Were Potentially Violated

The released warrant authorized the FBI to search for evidence that Trump has violated three key laws.

First, there is the Espionage Act, which applies to possession of information related to the national defense that could be used to harm the U.S. or aid a foreign adversary. This law applies to someone who, like Trump, initially had lawful possession of such information but who, after their time in office ended, refuses to return it to the government.

Then, there is obstruction of justice, which includes concealing documents to obstruct a federal investigation.

Finally, there is the Public Records statute, which prohibits someone entrusted with a public record from “concealing” that document.

What’s in the Inventory

The inventory of items taken by the FBI from Mar-a-Lago apparently shows Trump may have violated these laws in a number of different ways.

The inventory shows that FBI agents seized documents designated “SCI,” which refers to Sensitive Compartmented Information. In simple terms, this is classified information that comes from intelligence sources – and must be handled only within secured government locations.

Because this kind of sensitive information can reveal both methods and procedures for collecting intelligence – including the identity of undercover agents in hostile countries – the presence of such materials at Mar-a-Lago may be a violation of the Espionage Act, if Trump was willfully retaining this information after the government demanded its return.

The inventory also refers to numerous “top-secret” documents. Federal law defines this as “information or material which requires the highest degree of protection” and could threaten national security. The FBI’s discovery of top-secret documents could corroborate The Washington Post’s report that the FBI search included classified documents related to nuclear weapons. The FBI also seized documents designated “secret” and “confidential.”

All told, the FBI removed 27 boxes and other individually listed items, including photographs.

Trump received a federal subpoena in the spring of 2022 to return documents taken from the White House.

So if the inventory includes items that should have been returned in response to the subpoena, but were not, that can be evidence of obstruction of justice and concealment of public records.

Trump has suggested that the FBI may have planted evidence during its search.

However, federal rules about search warrants provide strong protection against such a possibility, by requiring that a government officer present when a search warrant is carried out “prepare and verify an inventory” of property seized in the presence of “another officer” and “the person from whom, or from whose premises, the property was taken.”

The officer must then “give a copy of the warrant and a receipt for the property taken to the person from whom, or from whose premises, the property was taken,” according to these rules.

U.S. Attorney General Merrick Garland said during his Aug. 11 statement about the search that these procedures were followed. “Copies of both the warrant and the FBI property receipt were provided on the day of the search to the former president’s counsel, who was on site during the search,” Garland said.

The federal rules say that if the owner of the premises is not present, another “credible person” can verify the inventory – in this case, the unsealed records confirm that Trump’s attorney, Christine Bobbs, acknowledged receipt of the inventory at 6:19 p.m. on Aug. 8, 2022. 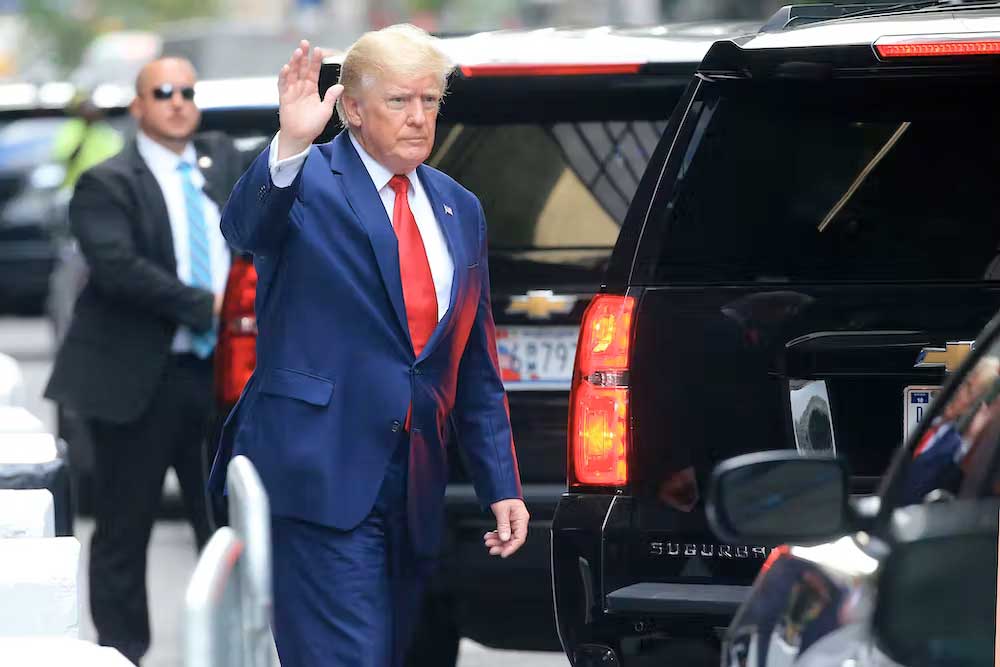 Donald Trump waves while walking to his car in New York City on Aug. 10, 2022. Stringer/AFP via Getty Images

Limited Precedent For Unsealing These Types of Documents

It’s relatively rare for a judge to unseal court records of a search warrant, unless an actual criminal prosecution is underway and the record is needed in court.

Unlike the Justice Department’s Aug. 12, 2022, order regarding Trump, the unsealing of the Clinton-related warrant included the underlying affidavit. An affidavit is a statement made under oath to the issuing judge to obtain the warrant.

Disclosure of these documents provided the basis for a firestorm of criticism by Clinton allies that there was insufficient evidence to support the FBI’s warrant application.

As explained in a judge’s October 2016 order to make the search warrant for the Clinton investigation public, warrant application proceedings “have historically been highly secretive in nature and closed to the press and public.” In that case, the judge said that in deciding whether to unseal, courts must consider both the government’s interest in not compromising an ongoing criminal investigation and the need to protect the privacy and reputation of the person subject to the search who may never be charged with a crime.

However, for the Mar-a-Lago warrant, both the government and Trump, the subject of the search, consented to the unsealing.

True to his reputation for careful judgment, Garland went by the book in response to an avalanche of attacks from Trump allies demanding transparency about the search. The warrant and inventory have now been released for all to see through a proper court procedure – which Trump publicly endorsed.