How Privatization and Corruption Magnified Puerto Rico’s Vulnerability to Hurricanes

How Privatization and Corruption Magnified Puerto Rico’s Vulnerability to Hurricanes

Still recovering from the 2017 disaster of Hurricane Maria, which killed 3000 Americans in Puerto Rico, the islands have been blacked again out by much smaller Hurricane Fiona. Two professors explain the issues.

Five years after Hurricane Maria wreaked havoc on Puerto Rico, Hurricane Fiona has killed at least four people, caused widespread flooding and left hundreds of thousands of residents without water or power. Maria caused extensive damage to Puerto Rico’s power grid in 2017 that left many residents without electricity for months. Rebuilding it has been hampered by technical, political and financial challenges.

Carlos A. Suárez and Fernando Tormos-Aponte are social scientists who study Latin American politics and environmental justice. They explain some of the factors that have hindered efforts to recover from Maria and prepare for subsequent storms on this island with a population of 3.2 million people.

In less than a century, Puerto Rico’s electricity system has gone full circle from private provision of electric power to a state-led effort to democratize access to power, and then back to a public-private partnership with a strong neoliberal ethos. Yet Puerto Ricans still face daily challenges in obtaining affordable and efficient electricity services.

When the island’s electric power system was created in the late 1800s, private companies initially produced and sold electricity. During the New Deal era in the 1930s, the government took over this role. People came to see electric power as a patrimonio, or birthright, that the government would provide, at times by subsidizing power for lower-income residents.

In the 1940s, Puerto Rico launched Operation Bootstrap, a rapid industrialization program that sought to attract foreign investments in industries such as textiles and petrochemicals. One important element was reliable and cheap electricity, provided by the state through the Autoridad de Energía Eléctrica, a public corporation known in English as the Puerto Rico Electric Power Authority, or PREPA.

PREPA took on significant debt, often at the request of elected officials. For example, in 2011, then-Speaker of the House Jennifer González legislated for the company to obtain a line of credit from the Banco Gubernamental de Fomento in order to reduce power bills ahead of the 2012 elections.

Gov. Alejandro García Padilla and Puerto Rico’s Financial Oversight and Management Board imposed austerity policies in 2012-2017 that subsequent governors have kept in place. This left PREPA with limited resources to prepare for Hurricane Maria or make repairs afterward.

In 2021, Puerto Rico’s government and the financial control board privatized power delivery on the island. PREPA continued to generate electricity, but LUMA Energy, a U.S.-Canadian consortium, received a 15-year contract to transmit and deliver power to customers.

LUMA is at the center of many controversies. It has resisted recognizing the largest and most powerful union in Puerto Rico as its employees’ exclusive representative. Many consumers’ monthly electric bills have increased significantly. LUMA was supposed to upgrade Puerto Rico’s grid, with billions of dollars in federal support, but outages continued. Critics have called the company secretive and corrupt.

Labor groups, environmentalists and academics have offered comprehensive alternatives, such as Queremos Sol, a proposal to install distributed solar power across the island, to reduce Puerto Rico’s dependence on fossil fuels and what they see as incompetent private administration.

#NewYork Attorney General @TishJames: "I am calling for a federal investigation into #LUMA and for critical upgrades and system improvements so that Puerto Ricans are never again left in the dark"https://t.co/xIfqO0fyjq#PuertoRico #Fiona #FueraLUMA pic.twitter.com/qXJADqSwyX

But the changes needed to address Puerto Rico’s energy crisis are inherently political. Enacting them will require support from the federal fiscal oversight board and Puerto Rican politicians. I believe the public will have to mobilize and rally to convince authorities that the PREPA of old and LUMA today are antiquated organizations that are unable to meet Puerto Ricans’ current needs.

Who Gets Disaster Aid?

Disaster aid has been slow to come to Puerto Rico. Five years after Hurricane Maria, the U.S. government is channeling funds to rebuild and harden the archipelago’s energy infrastructure. But only a few of the planned multimillion-dollar projects have been even partially approved.

In addition to privatization of the power system, residents have also contended with bureaucratic obstacles and the use of disaster resources for political gain.

Damage assessments after Maria were rough estimates because the storm was so destructive. The U.S. government ultimately calculated total damage to Puerto Rico and the U.S. Virgin islands at US$90 billion.

Now, Hurricane Fiona has caused further damage, which will require even more significant investments. No government authority has sufficient resources on the ground in Puerto Rico to conduct such an assessment, let alone react swiftly to the disaster.

Local elected officials are often eager to claim responsibility for securing funding. However, investments in disaster preparedness, such as improving the electric grid, have less impact on public perceptions of government performance than recovery funds that are disbursed shortly after a disaster strikes.

I expect that the Biden administration will seek to respond faster and more substantively to Hurricane Fiona than the Trump administration did after Hurricane Maria—but not necessarily out of compassion.

Presidents tend to use disaster resources to gain electoral advantage, reward supporters and portray themselves as capable disaster managers. And they typically are more vulnerable in election years.

Maria hit Puerto Rico during Donald Trump’s first year in office. Puerto Rican voters lean Democratic when they move to the U.S. mainland—as a commonwealth, the archipelago does not cast electoral votes—so Trump likely did not perceive Puerto Ricans as important to his election. The Trump administration engaged in deliberate efforts to delay disbursing Hurricane María recovery aid and denied the real toll of the disaster. 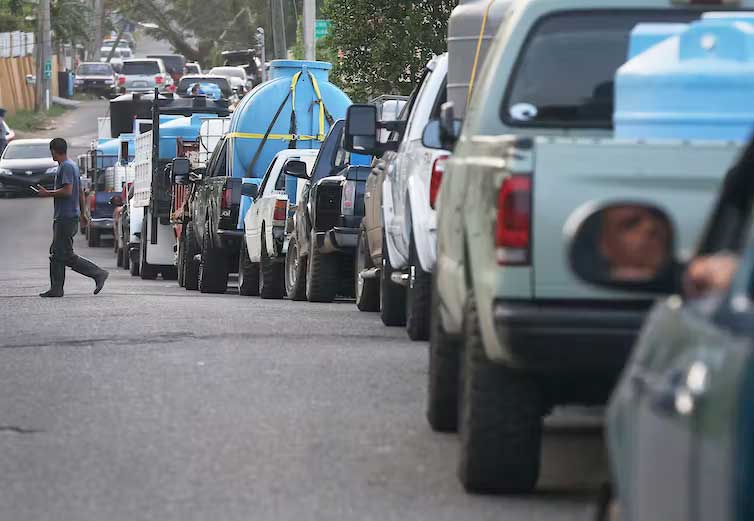 In contrast, Joe Biden relied more heavily on minority support for his 2020 presidential victory, and Hurricane Fiona has struck just two months before the 2022 midterm elections. Responding offers Biden an opportunity to prove himself a capable disaster manager and attract votes.

Even if the Biden administration is better organized and more responsive, however, marginalized communities often are hampered by administrative burdens when they try to access government resources.

For example, I have interviewed mayors in Puerto Rico who issued contracts to local providers to address urgent needs after the Federal Emergency Management Agency promised reimbursement. To this day, FEMA has not paid some of these mayors back, and the mayors fear that local vendors will not want to do further business with their governments.

Identifying and applying for U.S. government grants is a complex and tedious process that requires training. Access to that training is uneven, and language barriers often keep communities from seeking grants.

After Hurricane Maria, few Puerto Rican communities had the resources and support needed to cope with these barriers. In my view, governments must prioritize marginalized communities in their response to Hurricane Fiona to avoid reproducing the inequalities that marked the Hurricane María recovery. Elected officials must demand transparency and accountability from those tasked with distributing aid, while holding themselves to the same standards.

Republished with permission from The Conversation, by Carlos A. Suárez Carrasquillo, Senior Lecturer in Political Science, Center for Latin American Studies, University of Florida and Fernando Tormos-Aponte, Assistant Professor of Sociology, University of Pittsburgh