Members of the Oath Keepers stand in front of the U.S. Capitol on Jan. 6, 2021. AP Photo/Manuel Balce Ceneta

Members of the Oath Keepers stand in front of the U.S. Capitol on Jan. 6, 2021. AP Photo/Manuel Balce Ceneta

Far-right extremists or other hate groups can claim they are just venting or even fantasizing—both of which would be protected under the First Amendment. For this reason, seditious conspiracy charges have historically been hard to prosecute.

The verdicts in a high-profile, monthslong trial of Oath Keepers militia members were, as one defense lawyer acknowledged, “a mixed bag.” Leader Stewart Rhodes was found guilty on Nov. 29, 2022, of the most serious charge—seditious conspiracy—for his role in the Jan. 6, 2021, insurrection at the U.S. Capitol, and was acquitted on two other related charges.

One of Rhodes’ four co-defendants, Kelly Meggs, was also convicted of seditious conspiracy. All five on trial were found guilty of obstructing an official proceeding, namely Congress’ certification on Jan. 6, 2021, of the 2020 presidential election results.

The convictions for seditious conspiracy—a rarely used, Civil War-era charge typically reserved in recent decades for terror plots—are the most significant yet relating to the violent storming of the Capitol, and have meaning that extends beyond those who were on trial.

As someone who has studied the U.S. domestic militia movement for nearly 15 years, I believe the Oath Keepers convictions illuminate two crucial issues facing the country: the limits of the American right to free speech and the future of the militia movement. Rhodes’ seditious conspiracy conviction suggests the jury believed, as one prosecutor asserted, that he “concocted a plan for an armed rebellion to shatter a bedrock of American democracy.” In other words, he was convicted over what he had said and written prior to the actual Jan. 6 attack—and this is where free speech comes into play.

The First Amendment guarantees that “Congress shall make no law … abridging the freedom of speech, or of the press; or the right of the people peaceably to assemble, and to petition the Government for a redress of grievances.” It’s considered a sacred American right, one that sets the U.S. apart from many peer nations, some of which have stricter controls and consequences for speech that may be harmful.

Efforts to arrest and convict groups in the U.S. that have discussed violence against racial groups, politicians or others have often been stymied by appeals to the First Amendment.

Far-right extremists or other hate groups can claim they are just venting or even fantasizing—both of which would be protected under the First Amendment. In the absence of any specific plan, threat or incitement, group members may never suffer legal consequences for oral or written expressions that nonetheless create fear in those who draw these groups’ ire.

For this reason, seditious conspiracy charges have historically been hard to prosecute.

The last time this charge was attempted was against members of the Christian militia group called Hutaree in Michigan in 2009, for allegedly planning to engage law enforcement “in armed conflict.” But the judge dismissed the sedition charges, citing First Amendment protections.

What is interesting about the Oath Keepers case is that Rhodes himself did not breach the Capitol yet was convicted of seditious conspiracy. Meanwhile three of his co-defendants—Jessica Watkins, Kenneth Harrelson and Thomas Caldwell—did storm into the Capitol building, but were not convicted of that charge.

This suggests that the jury believed that Rhodes’ texts and other communications incited others to violent, undemocratic action in a way that requires accountability.

Rhodes’ conviction follows three other prosecutions that reflect an evolving understanding of the limits of free speech. Conspiracy-purveyor Alex Jones was ordered to pay almost US$1.5 billion to families of children killed in the Sandy Hook school shooting in three defamation cases arising from Jones’ lies about the children’s deaths, the shooting itself, and the parents.

Jones claims the prosecutions violated his rights to free speech.

Neither defaming someone nor inciting immediate lawless action are protected under the First Amendment—but these cases have often been hard to prove. The Oath Keepers and Alex Jones verdicts may herald a new and greater understanding of the slower-brewing social harms that can arise if people are allowed to spread misinformation without consequences. 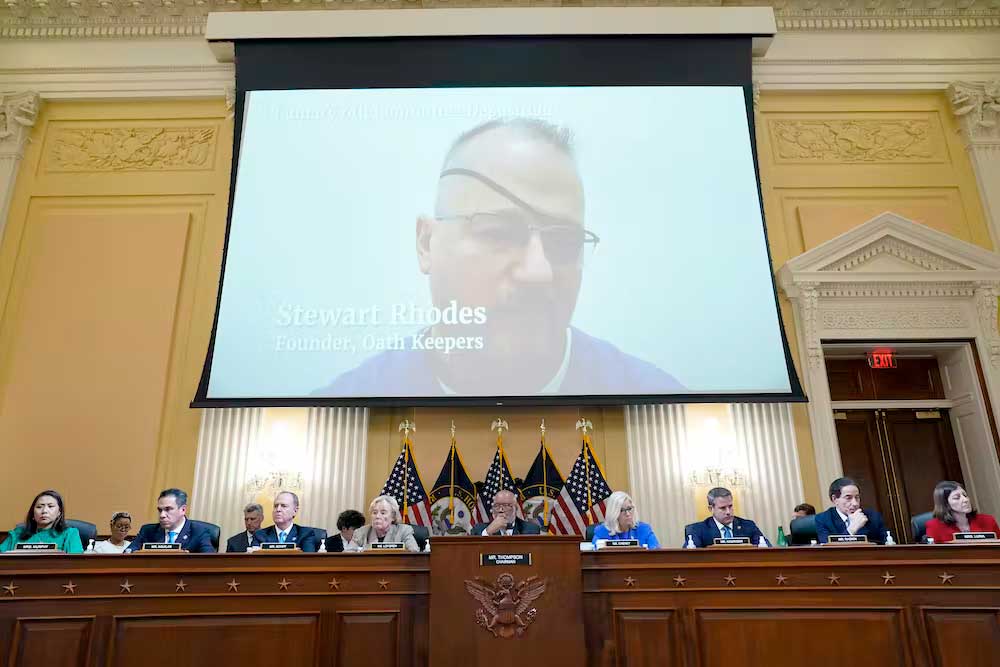 A video showing Stewart Rhodes during an interview with the January 6 Committee is shown at that committee’s public hearing June 9, 2022, on Capitol Hill in Washington. AP Photo/Andrew Harnik

The convictions of Rhodes and other Oath Keepers may also lead law enforcement agencies to similarly shift their understanding of militia groups.

In the past, such agencies, from the local to federal levels, have tended to disregard potential threats from militia groups. Some sheriffs in particular have even openly allied with militia groups for search and rescue efforts or used them for event “security.”

Both the seriousness of the charges against Rhodes and his defendants as well as the widely shared videos of physical assaults that took place on Capitol police officers during the insurrection may help change attitudes in at least some agencies.

The Oath Keepers convictions come just three months after convictions of several members of the Wolverine Watchmen, the militia whose members plotted to kidnap Michigan Gov. Gretchen Whitmer and put her on trial for treason. Together, the verdicts may, at the very least, solidify the impression that militia members have the potential for violent and organized actions against elected officials.

An unknown in all this is how militias may respond to the implications of the Oath Keepers verdicts.

It is unlikely that there will be one single reaction within the militia movement.

Rhodes has long been a controversial figure within the movement, with some militia leaders I have interviewed supporting his efforts and others strongly disliking him. Some told me a decade ago that they distrusted both his general abilities, citing his self-inflicted gunshot wound, and his motives for pushing the Oath Keepers to be a national organization. Militia members who have always disliked Rhodes had little sympathy for him as the trial developed.

Those in the militia movement who continue to believe the 2020 election was stolen, however, may well view Rhodes as a martyr for a bigger cause. For them, Rhodes’ conviction and whatever prison sentence he receives could very well become one of several reference points about the purported unfairness or illegitimacy of the system. It could even serve as a rallying point for militias and their sympathizers who believe the soul of their nation is at stake and will want to fight for their desired outcome in the next election.

The U.S. is unlikely to see another Capitol incursion. But the militia movement—in which Rhodes was a leader—and other groups who share many of its ideological principles will almost certainly continue to be a relevant political force as the country heads into the 2024 presidential election cycle.

Republished with permission from The Conversation, by Amy Cooter, Senior Research Fellow in Terrorism, Extremism and Counterterrorism, Middlebury Institute of International Studies