In 1938, a British engineer and amateur meteorologist made a discovery that set off a fierce debate about climate change.

Scientists had known for decades that carbon dioxide could trap heat and warm the planet. But Guy Callendar was the first to connect human activities to global warming.

He showed that land temperatures had increased over the previous half-century, and he theorized that people were unwittingly raising Earth’s temperature by burning fossil fuels in furnaces, factories and even his beloved motorcycles.

When Callendar published his findings, it set off a firestorm. The scientific establishment saw him as an outsider and a bit of a meddling gentleman scientist. But, he was right.

His theory became widely known as “the Callendar Effect.” Today, it’s known as global warming. Callendar defended his theory until his death in 1964, increasingly bewildered that the science met such resistance from those who did not understand it.

Building On Over a Century of Climate Science

A theoretical basis for climate change had been developed over the 114 years leading up to Callendar’s research.

Scientists including Joseph Fourier, Eunice Foote, John Tyndall and Svante Arrhenius had developed an understanding of how water vapor in the Earth’s atmosphere trapped heat, noted that carbon dioxide in the atmosphere also absorbed large quantities of heat and speculated about how increasing fossil fuel use could raise Earth’s temperature and change the climate.

However, these scientists spoke only of future possibilities. Callendar showed global warming was already happening. 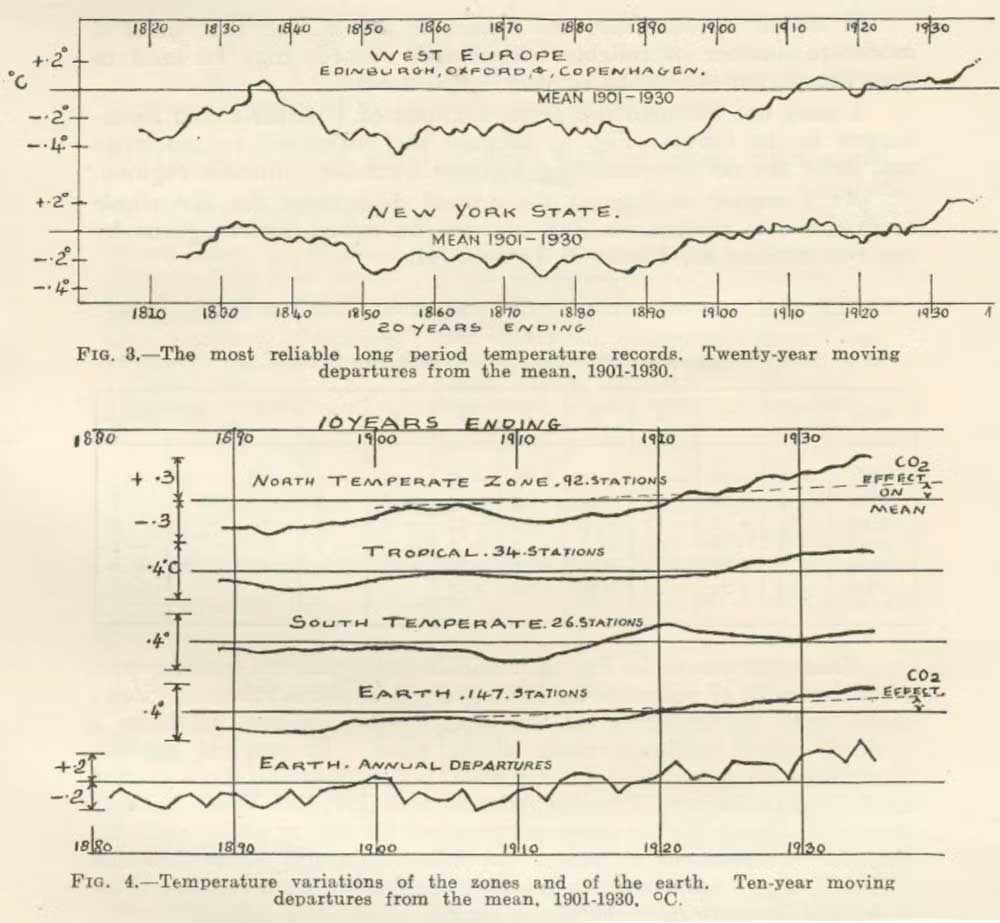 A page from Guy Callendar’s 1938 paper shows how he tracked and calculated CO2 changes, all in his spare time. GS Callendar, 1938

An Engineer Runs His Own Climate Experiments

Callendar received a certificate in mechanics and mathematics from City and Guilds College, London, in 1922 and went to work for his father, a well-known British physicist. The two shared interests in physics, motorcycles, racing and meteorology.

Callendar would later join the U.K. Ministry of Supply in armament research during World War II and continued to conduct war-related research at Langhurst, a secret research facility, after the war.

But his climate change work was done on his own time. Callendar kept journals with detailed weather data, including carbon dioxide levels and temperature. In an innovative paper published in 1938, he claimed there was an “increase in mean temperature, due to the artificial production of carbon dioxide.” 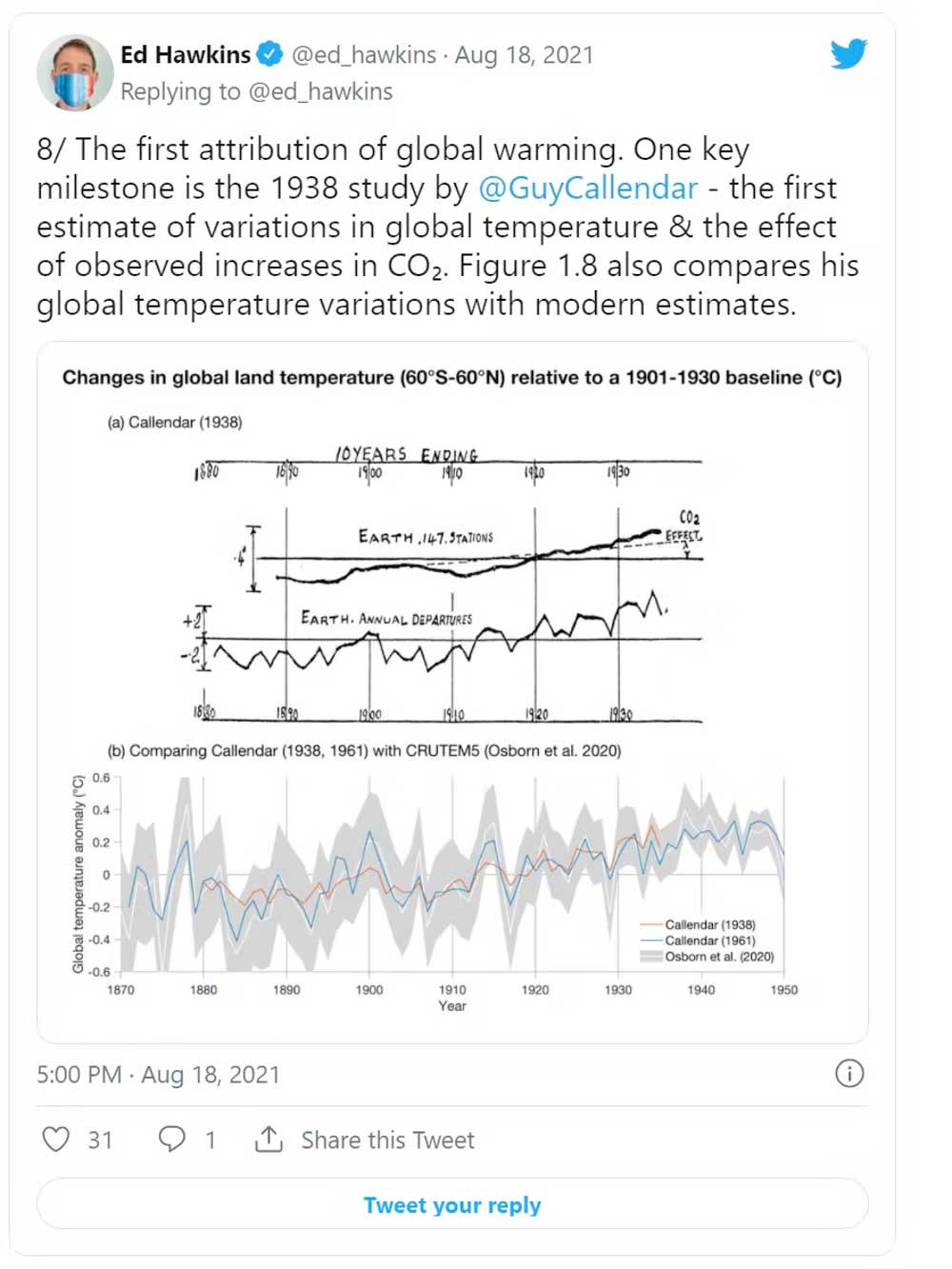 He also calculated how much carbon dioxide humans were putting into the atmosphere – the annual net human addition. In 1938, it was about 4.3 billion tons, which compares well with current estimates for that year of about 4.2 billion tons. Note that global carbon dioxide emissions in 2018 were about 36 billion tons.

Perhaps most importantly, Callendar recognized that new data on the heat absorption of carbon dioxide at wavelengths different from that of water vapor meant that adding carbon dioxide would trap more heat than water vapor alone.

In the period before Callendar’s paper, key scientists thought the huge volume of water vapor in the atmosphere, one of the “greenhouse” gases that keep Earth warm, would dwarf any contribution by carbon dioxide to Earth’s heat balance. However, heat is radiated out to space as waves, with a range of wavelengths, and water vapor absorbs only some of those wavelengths. Callendar knew that recent, more precise absorption data showed that carbon dioxide absorbed heat at wavelengths that water missed. 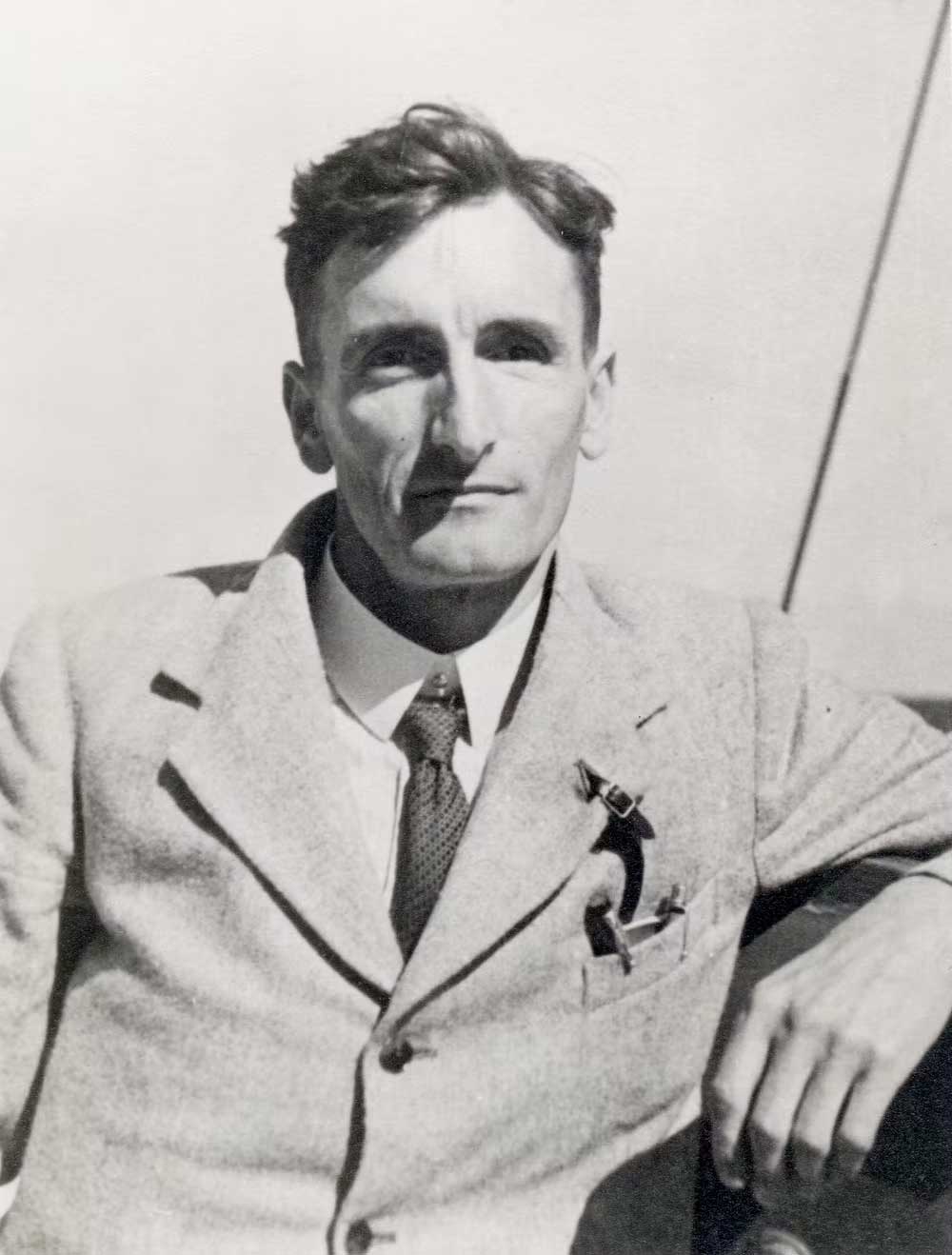 After Callendar published his paper, global warming caused by human activities generating carbon dioxide was widely referred to as the “Callendar Effect.”

However, his 1938 view was limited. Callendar did not foresee the magnitude of temperature rise that the world now faces, or the danger. He actually speculated that by burning carbon we might forestall “the return of the deadly glaciers.”

His paper projected a 0.39 degree Celsius temperature rise by the 21st century. The world today is already 1.2 C (2.2 F) warmer than before the industrial era – three times the magnitude of the effect Callendar predicted.

Backlash to the Human Connection

The debate Callendar ignited continued through the rest of the 20th century. Temperature and carbon dioxide data, meanwhile, accumulated.

By the late 20th century, reviews of climate science held stark warnings about the path the world was on as humans continued to burn fossil fuels. The debate Callendar triggered is long since over.

Scientists from around the world, brought together by the United Nations and the World Meteorological Organization, have been reviewing the research and evidence since 1990. Their reports confirm: The science is clear about humans’ role in climate change. The danger is real and the effects of climate change are already evident all around us.

Republished with permission from The Conversation, by Sylvia G. Dee, Assistant Professor of Earth, Environmental and Planetary Sciences, Rice University

Neil Anderson, a retired chemical engineer and chemistry teacher, contributed to this article.