The U.S. had seven operating offshore wind turbines with 42 megawatts of capacity in 2021. The Biden administration’s goal is 30,000 megawatts by 2030. AP Photo/Michael Dwyer

The U.S. had seven operating offshore wind turbines with 42 megawatts of capacity in 2021. The Biden administration’s goal is 30,000 megawatts by 2030. AP Photo/Michael Dwyer

Wind farms can built to deliver renewable power to the grid and provide surplus power for carbon capture and storage, optimizing this massive investment for a direct climate benefit.

Off the Massachusetts and New York coasts, developers are preparing to build the United States’ first federally approved utility-scale offshore wind farms – 74 turbines in all that could power 470,000 homes. More than a dozen other offshore wind projects are awaiting approval along the Eastern Seaboard.

By 2030, the Biden administration’s goal is to have 30 gigawatts of offshore wind energy flowing, enough to power more than 10 million homes.

Replacing fossil fuel-based energy with clean energy like wind power is essential to holding off the worsening effects of climate change. But that transition isn’t happening fast enough to stop global warming. Human activities have pumped so much carbon dioxide into the atmosphere that we will also have to remove carbon dioxide from the air and lock it away permanently.

Offshore wind farms are uniquely positioned to do both – and save money. 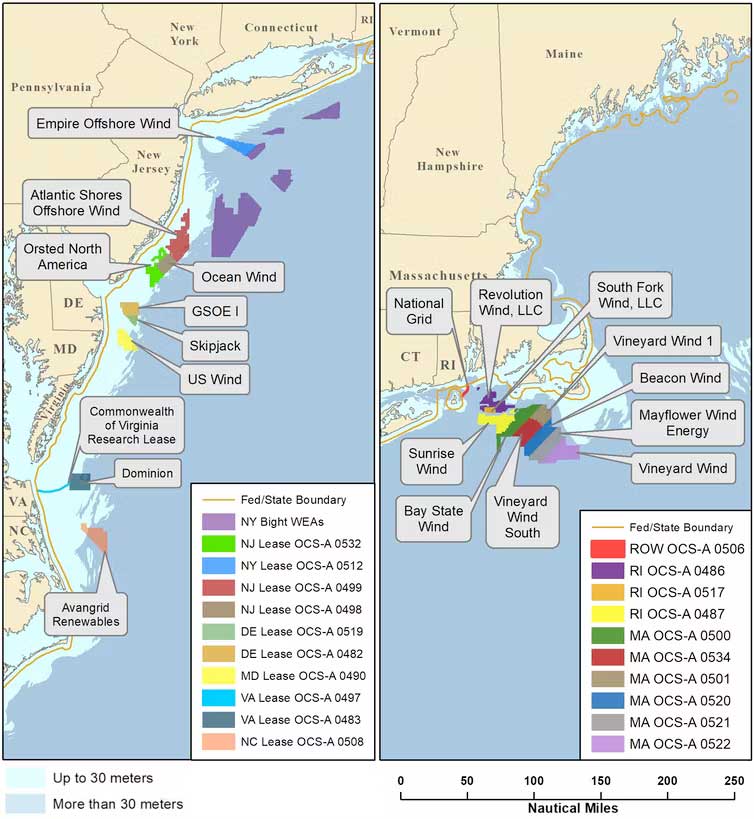 Most renewable energy lease areas off the Atlantic Coast are near the Mid-Atlantic states and Massachusetts. About 480,000 acres of the New York Bight is scheduled to be auctioned for wind farms in February 2022. BOEM

As a marine geophysicist, I have been exploring the potential for pairing wind turbines with technology that captures carbon dioxide directly from the air and stores it in natural reservoirs under the ocean. Built together, these technologies could reduce the energy costs of carbon capture and minimize the need for onshore pipelines, reducing impacts on the environment.

Capturing CO2 from the Air

Several research groups and tech startups are testing direct air capture devices that can pull carbon dioxide directly from the atmosphere. The technology works, but the early projects so far are expensive and energy intensive.

The systems use filters or liquid solutions that capture CO2 from air blown across them. Once the filters are full, electricity and heat are needed to release the carbon dioxide and restart the capture cycle.

For the process to achieve net negative emissions, the energy source must be carbon-free.

The world’s largest active direct air capture plant operating today does this by using waste heat and renewable energy. The plant, in Iceland, then pumps its captured carbon dioxide into the underlying basalt rock, where the CO2 reacts with the basalt and calcifies, turning to solid mineral.

A similar process could be created with offshore wind turbines.

If direct air capture systems were built alongside offshore wind turbines, they would have an immediate source of clean energy from excess wind power and could pipe captured carbon dioxide directly to storage beneath the sea floor below, reducing the need for extensive pipeline systems. 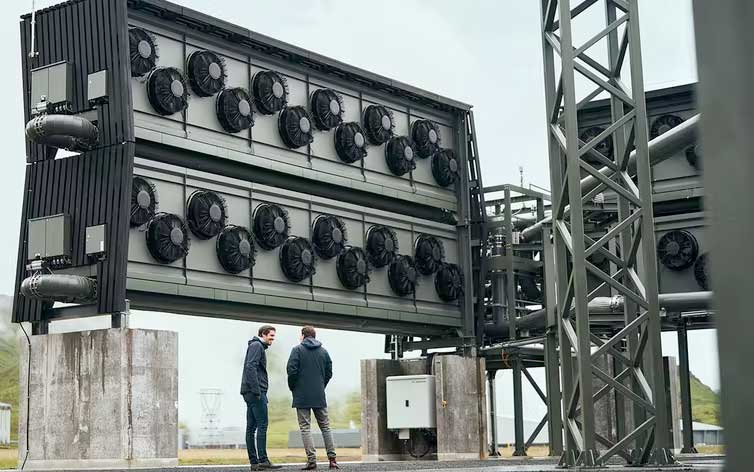 Researchers are currently studying how these systems function under marine conditions. Direct air capture is only beginning to be deployed on land, and the technology likely would have to be modified for the harsh ocean environment. But planning should start now so wind power projects are positioned to take advantage of carbon storage sites and designed so the platforms, sub-sea infrastructure and cabled networks can be shared.

By nature, wind energy is intermittent. Demand for energy also varies. When the wind can produce more power than is needed, production is curtailed and electricity that could be used is lost.

That unused power could instead be used to remove carbon from the air and lock it away.

For example, New York State’s goal is to have 9 gigawatts of offshore wind power by 2035. Those 9 gigawatts would be expected to deliver 27.5 terawatt-hours of electricity per year.

Based on historical wind curtailment rates in the U.S., a surplus of 825 megawatt-hours of electrical energy per year may be expected as offshore wind farms expand to meet this goal. Assuming direct air capture’s efficiency continues to improve and reaches commercial targets, this surplus energy could be used to capture and store upwards of 0.5 million tons of CO2 per year.

That’s if the system only used surplus energy that would have gone to waste. If it used more wind power, its carbon capture and storage potential would increase. 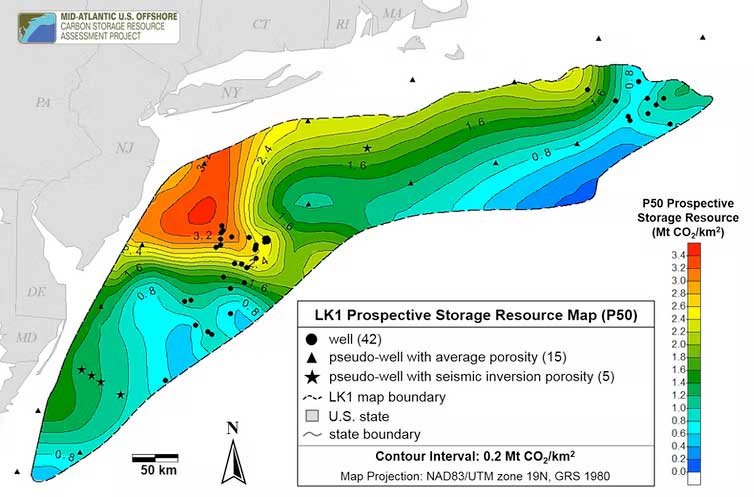 Several Mid-Atlantic areas being leased for offshore wind farms also have potential for carbon storage beneath the seafloor. The capacity is measured in millions of metric tons of CO2 per square kilometer. The U.S. produces about 4.5 billion metric tons of CO2 from energy per year. U.S. Department of Energy and Battelle

The Intergovernmental Panel on Climate Change has projected that 100 to 1,000 gigatons of carbon dioxide will have to be removed from the atmosphere over the century to keep global warming under 1.5 degrees Celsius (2.7 Fahrenheit) compared to pre-industrial levels.

Researchers have estimated that sub-seafloor geological formations adjacent to the offshore wind developments planned on the U.S. East Coast have the capacity to store more than 500 gigatons of CO2. Basalt rocks are likely to exist in a string of buried basins across this area too, adding even more storage capacity and enabling CO2 to react with the basalt and solidify over time, though geotechnical surveys have not yet tested these deposits.

Planning Both At Once Saves Time and Cost

New wind farms built with direct air capture could deliver renewable power to the grid and provide surplus power for carbon capture and storage, optimizing this massive investment for a direct climate benefit.

But it will require planning that starts well in advance of construction. Launching the marine geophysical surveys, environmental monitoring requirements and approval processes for both wind power and storage together can save time, avoid conflicts and improve environmental stewardship.

Republished with permission from The Conversation, by David Goldberg, Columbia University