The investigation into Florida Congressman, Matt Gaetz, is generating a blizzard of stories. Here's a few highlights of what's coming to light, generating schadenfreude, general cringing and head-shaking popcorn consumption.

The investigation into Florida Congressman, Matt Gaetz, is generating a blizzard of stories. Here’s a few highlights of what’s coming out and generating schadenfreude, general cringing and head-shaking popcorn consumption.

Yesterday a story appeared on TheHill and other outlets that the Mad Dog PAC in Florida had commissioned some rather hard-hitting billboards in honor of the accusations that Matt Gaetz paid for sex with a minor. 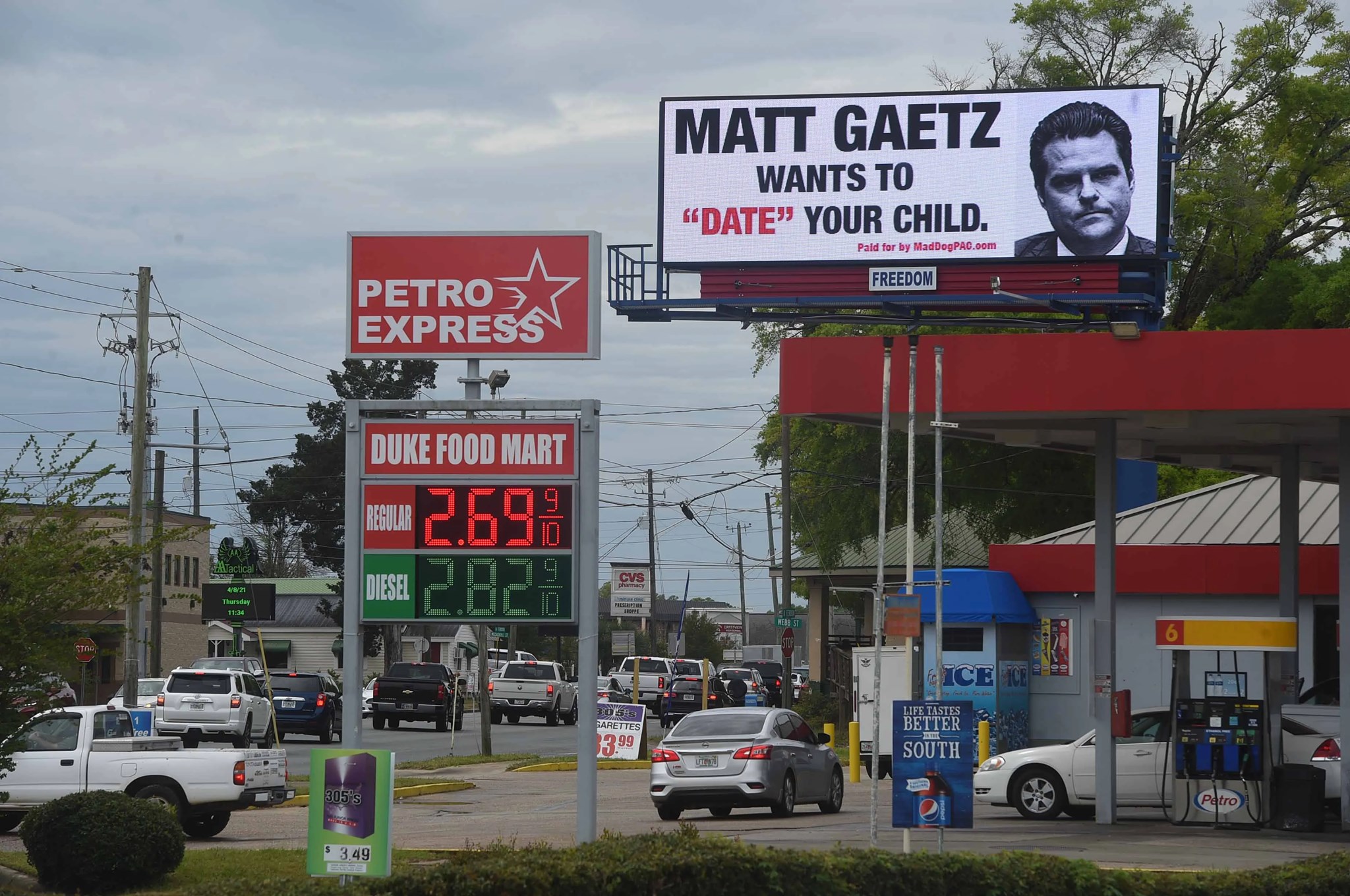 Under the Bus Wheels

Vanity Fair has a new piece out about Joel Greenberg, the former Florida tax collector and friend of Matt Gaetz. Greenberg is under indictment for sex trafficking and is now reportedly considering a plea deal that will be nothing but bad news for Gaetz, who is already implicated by a growing pile of evidence.

Kudos to Vanity Fair for a great headline for their piece, “Matt Gaetz Should Be Shitting Himself Right Now, Says Lawyer for Gaetz Pal Likely Cooperating With the Feds.”

The New York Times and other outlets are covering the story that yet another senior aide on Gaetz’s congressional staff has suddenly resigned.

“The aide, Devin Murphy, resigned as Mr. Gaetz’s legislative director on Friday. He told associates that he was interested in writing bills, not working at TMZ — equating the work that Mr. Gaetz’s aides were now handling to the tabloid publication, according to one of the people, who all asked not to be identified discussing a sensitive personnel matter.”

The Daily Beast has a story that gives great details of how Joel Greenberg paid girls for sex with money provided by Matt Gaetz. In spite of Gaetz denials and how this whole scandal is contrived in some way, there appears to be at least a digital transaction record.

BusinessInsider has a story about Gaetz now being under investigation for running a sham or “ghost” candidate for a Florida senate seat. This is interesting because former Florida Senator, Frank Artiles, was recently arrested for financing a sham candidate with a similar last name to an incumbent he was trying to help defeat. AP has good coverage of this story. It has a remarkably similar dirty-tricks pattern…

Not even Donald Trump is coming to the rescue of his unfailing loyal minion. Staffers apparently talked him out of it. But Trump may have other problems on this front as well. Video has popped up of Trump and Melania meeting with another person involved with the Gaetz sex-trafficking flap, a Jason Pirozzolo.

Pirozzolo, is a hand surgeon and marijuana entrepreneur, accused of paying for travel expenses – including female escorts – on a trip he took with Congressman Gaetz to the Bahamas in late 2018 or early 2019.

The tempo of hits Gaetz is taking seems to be increasing. One wonders how soon he will finally heed the calls for his resignation, including one now from Republican congressman, Adam Kinzinger.

As today progressed, Gaetz managed to generate even more bad news. First there was the letter, from the “Women of Matt Gaetz Office” defending him. Interestingly, no one signed it.

Next came the announcement that he is under investigation by the House Ethics Committee. 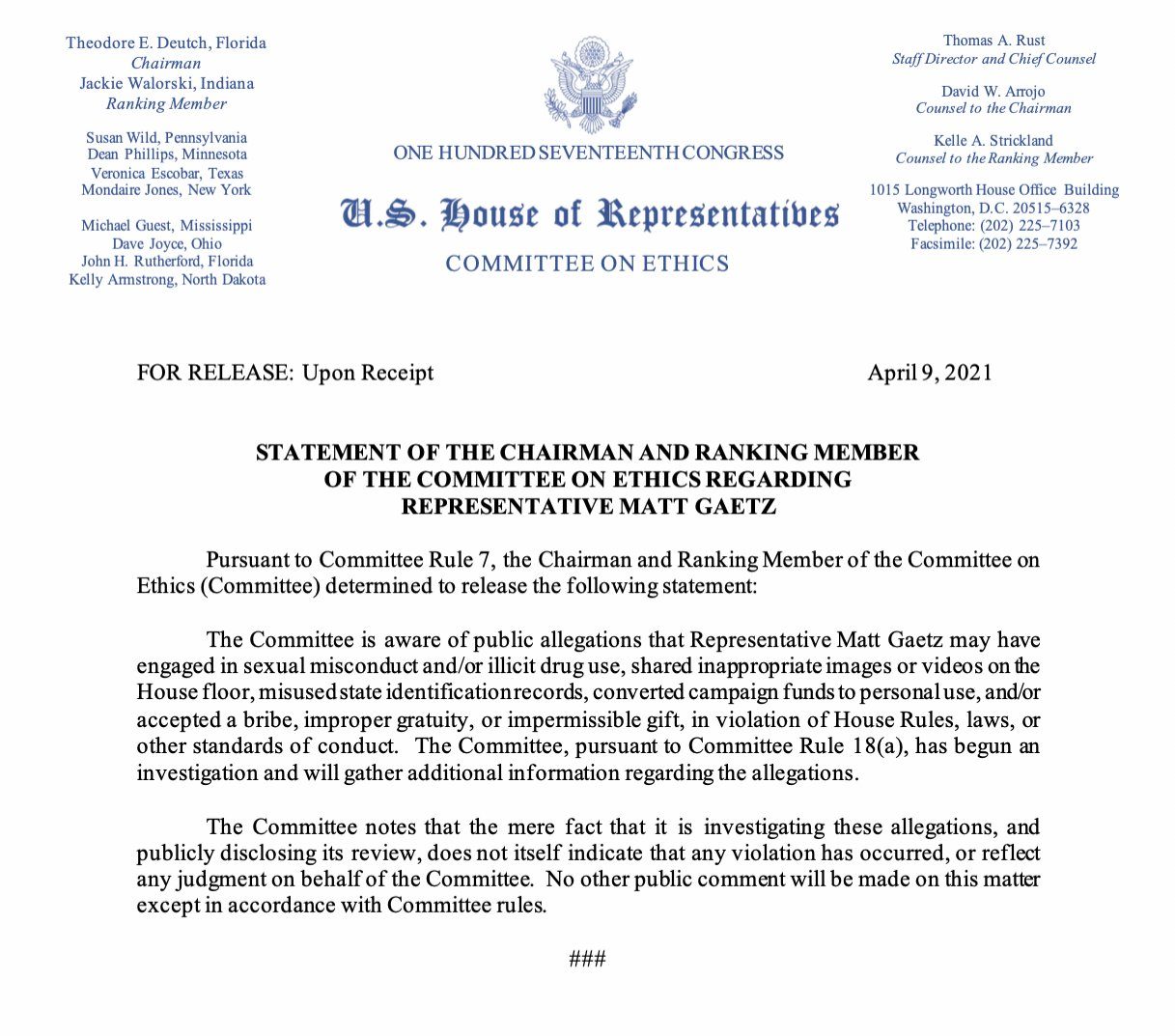 Gaetz has apparently hired a D.C. PR firm, The Logan Group, to help sort out the mess. Bang-up job so far. It will probably be easier to cork Niagra Falls.

A researcher has isolated five types of threat utilizing the speech generalities of “us” and “them” and how they are used to divide societies...
Read More

Meta and other major social media companies had ignored or brushed off warnings that their platforms were being used as crucial organizing hubs for Brazil’s...
Read More

A highly abused tax loophole, exploited for billions in tax avoidance, was closed by a provision the year-ending $1.7 trillion spending bill. Of course the companies...
Read More

It is a bitter irony that on the second anniversary of the Insurrection, McCarthy finally made enough concessions to become Speaker to the very people who participated...
Read More