Black American GIs stationed in Britain during the war, these in Bristol, were given a warm welcome by their hosts but treated harshly by their white US Army comrades. brizzlebornandbred, CC BY-NC-SA

Black American GIs stationed in Britain during the war, these in Bristol, were given a warm welcome by their hosts but treated harshly by their white US Army comrades. brizzlebornandbred, CC BY-NC-SA

The racism instilled in white American soldiers during WWII was not left behind when Black soldiers were readily and happily accepted by British civilians. In one long-buried incident, this tension resulted in a pitched battle between Black soldiers and white MPs.

Republished with permission from The Conversation, by Alan Rice, University of Central Lancashire

Bullet holes found in the wood surrounds of the NatWest Bank in Bamber Bridge, in Lancashire in the north of England, in the late 1980s led to the rediscovery of an event that saw some of the few shots fired in anger in England during World War II, which had been largely forgotten. These were not shots fired by invading troops, but by American GIs against their own military police.

Intrigued by his discovery, Clinton Smith, the black British maintenance worker who discovered the holes in the woodwork, asked locals how they could have got there. He was told that they were the remnants of the Battle of Bamber Bridge, when black American troops stationed in the town faced off against white US Army military police on the night of June 24-25, 1943.

More a mutiny than a battle, it led to the death of Private William Crossland in nearby Mounsey Road, and four other injuries to black American soldiers in a five-hour confrontation which spread from the thatched Olde Hob Inn at one end of the town to the Adams Hall army camp, where from early 1943 the US Eighth Army Quartermaster Truck Company, a black company apart from a few white officers, had been based. The event was officially downplayed, in order not to undermine morale on the home front, but the events of that night led to the conviction of 27 black American soldiers.

The whole incident is typical of the clashes on and around bases in Britain between black and white American troops – 44 between November 1943 and February 1944 alone – where the intrinsic racism in a segregated army led to confrontations. This was especially the case in a foreign setting where the black soldiers saw around them a very different reality from that they faced at home – a non-segregated society where they were welcomed as fellow fighters against fascism, rather than tolerated hod-carriers for the war effort as they were generally treated by the US Army.

That evening in 1943, black troops and white locals were stretching out “drinking-up time” in a pub at the end of the evening. Words were exchanged, and military police arrived and tried to arrest Private Eugene Nunn for not wearing the proper uniform. But they faced new solidarities: a white British soldier challenged the military police: “Why do you want to arrest them? They’re not doing anything or bothering anybody.”

The incident escalated into a fist fight and the military police were beaten back. When they returned with reinforcements to meet the group, now returning to camp, a battle developed in the street. Shots were fired, and Crossland died with a bullet in his back. 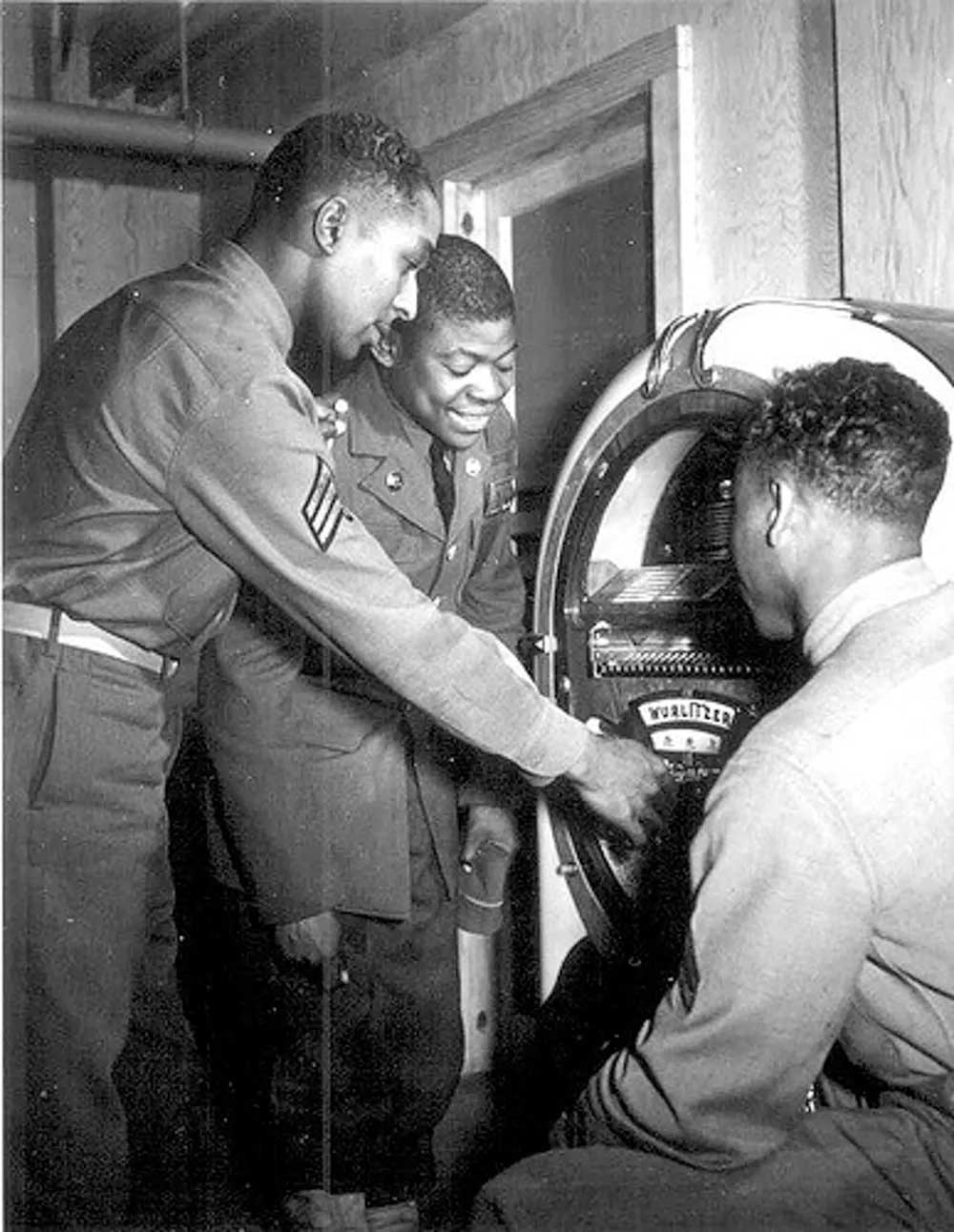 Black GIs would drink in mixed company in British pubs, to the horror of the white US Army authorities. brizzlebornandbred

When rumours spread at the camp that black GIs had been shot, scores of men formed a crowd, some carrying rifles. The arrival at around midnight of more military police with a machine gun-equipped vehicle convinced many of the black soldiers that the police intended to kill them – and they drew rifles from the stores. Some barricaded themselves into the base, others tore off back into town, leading to running shooting battles in the streets.

Many of the black American troop standing up to the military police that febrile night were no doubt influenced by news filtering through of race riots in Detroit on June 20, where defenceless black men were attacked by racist police, responsible for the deaths of 17 of the 25 African-Americans killed.

Race Relations at Home and Abroad

In his essays George Orwell alluded to the oft-quoted assertion that American GIs were “oversexed, overpaid and over here”. But he qualified this with the observation that: “the general consensus of opinion is that the only American soldiers with decent manners are Negroes.”

The black American servicemen were welcomed into the leisure time of their British hosts in ways that spread solidarity. A former black GI, Cleother Hathcock, remembers:

At that time the Jitterbug was in and the blacks would get a buggin’ and the English just loved that. We would go into a dance hall and just take over the place because everybody wanted to learn how to do that American dance, the Jitterbug. They went wild over that.

The town did not share the US Army’s segregationist attitudes. According to the author Anthony Burgess, who spent time in Bamber Bridge during the war, when US military authorities demanded that the town’s pubs impose a colour bar, the landlords responded with signs that read: “Black Troops Only”. The extent to which this rankled the white American troops is shown by the comments of a lieutenant:

One thing I noticed here and which I don’t like is the fact that the English don’t draw any color line. The English must be pretty ignorant. I can’t see how a white girl could associate with a negro.

This sort of attitude exemplifies the particular resentment over the way black troops openly fraternised with white British women – and many of the confrontations during this period were sparked by the ease of interracial relationships in a British rather than American context.

The military authorities tried to push back against this by imposing Jim Crow segregation in Britain, so that when the black American world heavyweight boxing champion Joe Louis visited on a propaganda tour in 1944 he encountered blatant discrimination from the troops he was visiting, as he had at home.

The events in Bamber Bridge encapsulated these Jim Crow practices – and the wider paradox of the open-armed welcome from the local residents coupled with resentment of that welcome by white American troops. The pub was a place of sanctuary for black troops where they mingled with, mainly friendly, locals, and where the segregation many had to endure in the American South was thankfully absent.

Local resident Gillian Vesey recalled how, as a young barmaid at the Olde Hob Inn, she stood up for African American soldiers against attempts by white Americans to impose discriminatory practices in the pub, insisting that the American white soldiers wait their turn rather than expecting to be served before their black colleagues.

Keeping a segregated army in the context of fighting for democracy became untenable, and in 1948 the then US president Harry Truman signed Executive Order 9981 which eventually led to an integrated army. While the convictions of the troops involved at Bamber Bridge were largely commuted or overturned, soldiers returned to Jim Crow segregation in the US, with the reality that some veterans were lynched in their uniforms.

But the new freedoms they experienced in Europe meant they were not prepared to put up with discrimination, racism and racial violence again. As veteran Wilford Strange said in the documentary film Choc’late Soldiers from the USA:

I think the impact these soldiers had by volunteering was the initiation of the Civil Rights movement, ’cos these soldiers were never going back to be discriminated against again. None of us were.

Creating Memorials, Building Identities: The Politics of Memory in the Black Atlantic

Fact Heroes, Racism (Us vs Them)

White supremacist nationalism is deadly and increasingly normalized by one of our political parties and a major TV network.
Read More

Bernie Sanders Unveils Medicare for All Act of 2022

A study by RAND found that moving to a Medicare for All system would save a family with an income of less than $185,000 about $3,000 a year, on average.
Read More

State Anti-Abortion Laws Are Causing Confusion for Treatment of Miscarriages

In Texas, anti-abortion laws are creating uncertainties that may deter some doctors and other providers from offering optimal miscarriage treatment.
Read More

Reuters identified five law enforcement trainers who have been hired by police and sheriffs’ departments nationwide despite their support for right-wing militia...
Read More

Fact Heroes, Human Rights, Racism (Us vs Them)

During the Civil War, Harriet Tubman put aside her fight against slavery to conduct combat as a soldier and spy for the United States Army.
Read More