Only a small percentage of people who hold extremist views ever actually commit acts of violence, but the findings of a survey by University of Chicago reveal how many Americans hold views that could turn them toward insurrection.

Republished with permission from The Conversation, by Robert A. Pape, University of Chicago

A recent Washington demonstration supporting those charged with crimes for the Jan. 6 insurrection at the U.S. Capitol fizzled, with no more than 200 demonstrators showing up. The organizers had promised 700 people would turn out — or more.

But the threat from far-right insurrectionists is not over.

For months, my colleagues and I at the University of Chicago Project on Security and Threats have been tracking insurrectionist sentiments in U.S. adults, most recently in surveys in June. We have found that 47 million American adults — nearly 1 in 5 — agree with the statement that “the 2020 election was stolen from Donald Trump and Joe Biden is an illegitimate president.” Of those, 21 million also agree that “use of force is justified to restore Donald J. Trump to the presidency.”

Our survey found that many of these 21 million people with insurrectionist sentiments have the capacity for violent mobilization. At least 7 million of them already own a gun, and at least 3 million have served in the U.S. military and so have lethal skills. Of those 21 million, 6 million said they supported right-wing militias and extremist groups, and 1 million said they are themselves or personally know a member of such a group, including the Oath Keepers and Proud Boys.

Only a small percentage of people who hold extremist views ever actually commit acts of violence, but our findings reveal how many Americans hold views that could turn them toward insurrection.

In June 2021, our group commissioned a survey done by the independent, non-partisan researchers at NORC at the University of Chicago, seeking to discover how widespread insurrectionist sentiments are among U.S. adults.

The research methods meet the highest standards in the polling industry — a random sample of a representative sample. It’s the same process NORC uses to conduct polling for The Associated Press, the federal government and other major institutions.

First, NORC pulls together a panel of 40,000 people, called AmeriSpeak, who are representative of the entire U.S. population on dozens of characteristics, such as age, race, income, location of residence and religion. From that representative sample, NORC drew a random sample — in our case, 1,070 people.

Overall, 8% of the survey participants share both of those views.

The margin of error of this survey was plus or minus 4 percentage points. So when calculating the number of the 258 million adult Americans who hold these views, we looked at the range of between 4% and 12% — which gave us between 10 million and 31 million. The best single figure is the middle of that range, 21 million. 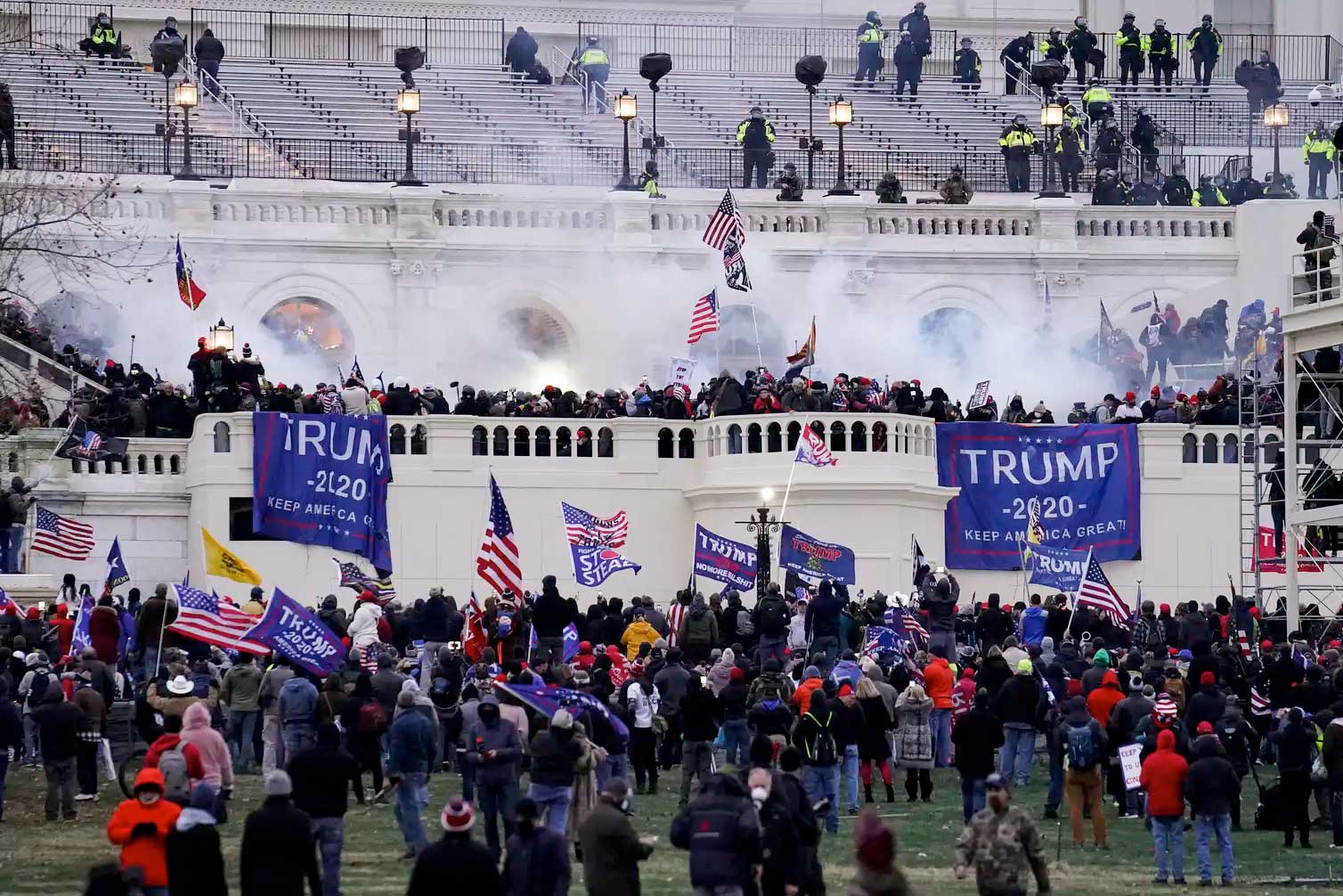 On Jan. 6, 2021, people claiming the presidential election had been stolen stormed the U.S. Capitol in hopes of keeping Donald Trump in office. AP Photo/John Minchillo

People who said force is justified to restore Trump were consistent in their insurrectionist sentiments: Of them, 90% also see Biden as illegitimate, and 68% also think force may be needed to preserve America’s traditional way of life.

The fringe moving into the mainstream

Combined with their military experience, gun ownership and connections to extremist groups and militias, this signals the existence of significant mainstream support in America for a violent insurrection.

This group of 21 million who agree both that force is justified to restore Trump and that Biden is an illegitimate president has two additional views that are also on the fringes of mainstream society:

Some people with insurrectionist sentiments hold one of these political views but not the other, suggesting there are multiple ways of thinking that lead a person toward the insurrectionist movement.

This latest research reinforces our previous findings, that the Jan. 6 insurrection represents a far more mainstream movement than earlier instances of right-wing extremism across the country. Those events, mostly limited to white supremacist and militia groups, saw more than 100 individuals arrested from 2015 to 2020. But just 14% of those arrested for their actions on Jan. 6 are members of those groups. More than half are business owners or middle-aged white-collar professionals, and only 7% are unemployed.

There is no way to say for sure when — or even whether — these insurrectionists will take action. On Jan. 6, it took clear direction from Donald Trump and other political leaders to turn these dangerous sentiments into a violent reality. But the movement itself is larger and more complex than many people might like to think.